There is a need for mainstreaming renewable energy, but the budget outlay proposed in the 12th Plan is grossly inadequate

As the country continues to strive to achieve energy security, there is ample evidence of unmet demand for access to electricity and cleaner energy in rural areas. The latest Census (2011) figures, which indicate that only 55 per cent of the rural households have access to electricity and 85 per cent of the rural households are significantly dependent upon biomass fuels for their energy requirements, further underline the need for mainstreaming renewable energy in the demand and supply chains of energy in the country. 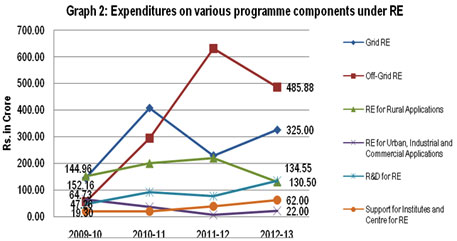 Within the total Union Budget outlay for MNRE in 2012-13, solar energy has received nearly 50 per cent of the budget, much higher than the priorities for developing other renewable energy sources like wind, small-hydro and bio-energy (see Graph 3). 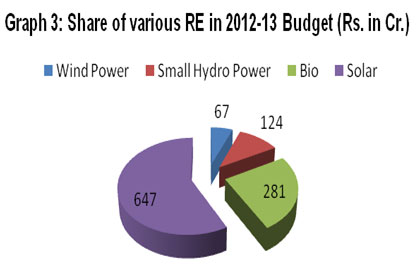 Solar energy is being administered under the Jawaharlal Nehru National Solar Mission (JNNSM) as part of the National Action Plan for Climate Change (NAPCC). As the phase 2 of the JNNSM is being envisaged till 2016-17, the solar energy sector can be expected to get more budgetary resources under MNRE over the 12th Plan.

The 12th Plan and the NAPCC have envisaged that by 2016-17 the share of renewable energy in the electricity mix of the country should reach 12 per cent, for which the corresponding renewable energy power requirement would be about 55,000 MW more than the present installed capacity of 25,000 MW. In order to double the installed capacity of renewable energy, the 12th Plan has approved an outlay of Rs 33,000 crore, of which the gross budgetary support would be of Rs 19,113 crore and the remaining Rs13,890 crore would be the investments to be made by public sector undertakings.

However, given the need for mainstreaming renewable energy in the country’s energy roadmap and the kind of public investments that would be required for the same, the budget outlay proposed by the 12th Plan (the gross budgetary support of Rs 19,113 crore for the five year period) does not appear to be adequate at all. In sharp contrast, the Plan outlays approved for the Ministry of Power and the Ministry of Petroleum and Natural Gas is as high as Rs 8.8 lakh crore (for the 12th Plan period).

The level of public investment indicated for the 12th Plan period is unlikely to address the requirements of high capital investments for the renewable energy sector. Certain areas of concern in the renewable energy sector, like the lack of evacuation, transmission and distribution infrastructure, the need for developing new renewable energy networks, development of the storage technologies, incentivizing the sector to achieve grid parity with the conventional sources of energy, warrant huge public investments. As per the Grid Corporation of India’s estimates, in order to realize the capacity addition plans for the 12th Plan period, an investment of around Rs 30,000 crore would be required for creating and strengthening renewable energy power transmission infrastructure alone.

Besides the investment shortfalls for the sector, certain other issues relating to renewable energy need to be addressed in the 12th Plan period. As commercial energy consumption increases over time, there would be a huge challenge for our policymakers to make renewable energy a viable and affordable source of energy for such purposes.

Further, there are certain regulatory issues that need to be addressed to incentivize the sector. There is a need to grant priority sector status to renewable energy projects in order to enable the sector to access priority lending by commercial banks. Further, the Electricity Act of 2003 (amended in 2007) needs to be amended further to make it mandatory for the state electricity regulatory commissions to use their respective renewable energy purchase obligations in their respective states to promote renewable energy. Also, two separate but simultaneous tracks need to be pursued for renewable energy development – (a) that for decentralized and off-grid solutions at the level of villages and clusters of villages, and (b) those for grid-connected solutions.

Gyana Ranjan Panda and Saumya Shrivastava work with Centre for Budget and Governance Accountability (CBGA) in New Delhi and can be reached at gyana@cbgaindia.org and saumya@cbgaindia.org