Electricity generation from all fossil fuel-based sources, such as lignite, hard coal, natural gas, petroleum products has declined in the country

A new record was set on May 11, 2014 at noon, when wind, solar PV, biomass and hydro contributed 43.5 GW (74 per cent) of the instantaneous power requirement in Germany.

(graph) Renewable Energy meeting 74 per cent of instantaneous load in Germany on   May 11, 2014 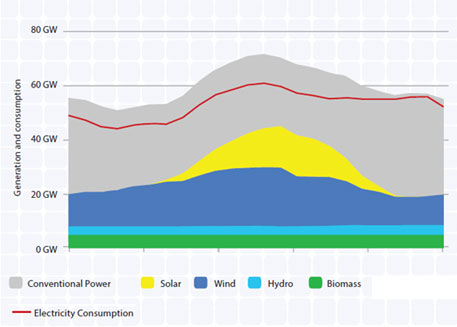 Germany has set national renewable electricity targets of 40 to 45 per cent by 2025, 55 to 60 per cent by 2035 and 80 per cent by 2050. Based on 2014 performance, those targets appear to be achievable. Germany’s goal of “Energiewende” or energy transition to renewable energy is very much on its path.