The move may have been triggered by geopolitical considerations rather than concern for the environment, they say 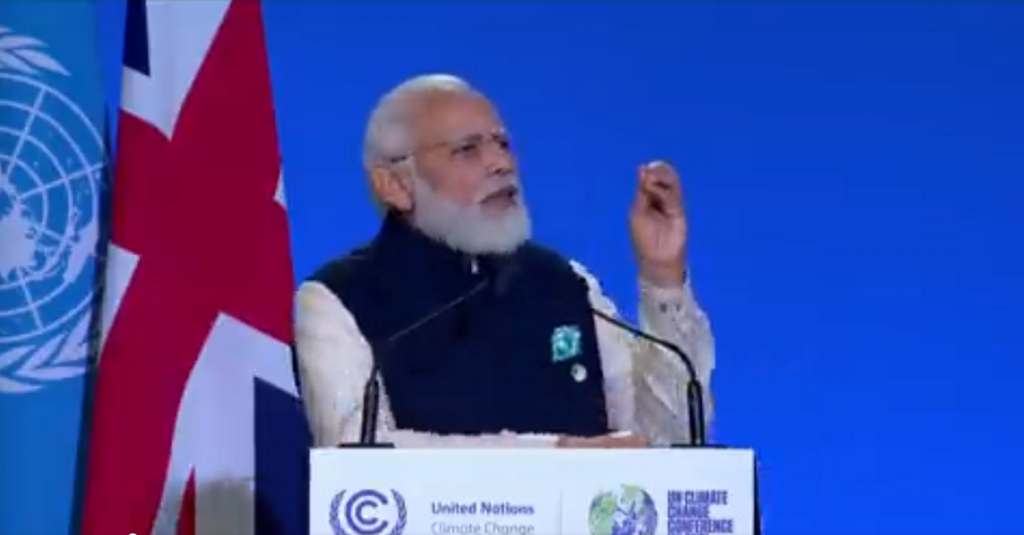 Prime Minister Narendra Modi announced October 1, 2021 that India aims to become a ‘net-zero’ carbon emitter by 2070, jumping on the bandwagon of setting a carbon neutrality deadline. He was speaking at the leaders’ meeting during the 26th Conference of Parties (CoP26) to the United Nations Framework Convention on Climate Change.

Modi announced a few other emissions cut targets but linked their compliance with the support received from developed countries.

Experts welcomed India’s commitments but observed that the move was triggered more by geopolitical considerations rather than concern for the environment. The country’s effort to turn the tables on developed countries, particularly the United States and the United Kingdom, who have recently put enormous pressure on India to announce its ‘net-zero’ target, they perceived.

It was also felt that India has set the ball rolling in CoP26 climate talks with its bold but somewhat unexpected announcements.

India was initially reluctant to either announce a ‘net-zero’ target soon or revise its nationally determined commitments (NDC) on reducing emissions. It has repeatedly stressed that it is on its way to achieve its Paris agreement goals.

The country sought to undertake a course correction to avoid being singled out as most countries with significant emissions, including China, have announced their targets.

The Prime Minister also announced raising bolder emission reduction targets and revised NDCs. India will have 500 gigawatts installed renewable energy capacity by 2030 instead of the 400-GW target, he said.

Achieving 450 gigawatt from non-fossil fuel sources, though earlier announced by Modi, was not part of India’s NDC in Paris.

India will also fulfill 50 per cent of its energy requirements from renewable sources by 2030, Modi said. The country will reduce 1 billion tonnes of carbon emissions in the same timeline, apart from minimising carbon intensity by 45 per cent in its economy, he added.

The resolutions were part of his “panchamrit” (five nectar elements) to deal with the climate crisis.

Modi, however, linked the proposed mitigation plan with climate finance and transfer of technology — two key longstanding demands of India.

“Today, when India has resolved to move forward with a new commitment and a new energy …  the transfer of climate finance and low-cost climate technologies become more important,” he said, adding:

India expects developed countries to provide climate finance of $1 trillion at the earliest. Today, it is necessary that as we track the progress made in climate mitigation, we should also track climate finance.

India is a developing country like India, which is working to lift crores of people out of poverty, the Prime Minister said. “India has left no stone unturned in fulfilling its obligations, despite having 17 per cent of the world's population and only 5 per cent contribution to emissions.”

Displaying India’s track record at the global forum, he said, the country has the fourth-highest installed renewable energy capacity in the world. “India's non-fossil fuel energy has increased by more than 25 per cent in the last 7 years (since he became the Prime Minister), and now it occupies 40 per cent in our energy mix,” Modi added.

He also highlighted some other achievements such as the LED bulb campaign and Indian Railways’ progress towards turning ‘net-zero’ by 2030.

The Prime Minister referred to India's role in reducing global emission burden with its pioneering role in setting up the International Solar Alliance and creation of a coalition for disaster resilient infrastructure for climate adaptation.

“I propose to you today a one-word movement… ‘LIFE’— that stands for Lifestyle for Environment,” he said. There is a need for all of us to come together in collective participation, to take the campaign forward.

A bold but political decision under pressure

Climate experts have welcomed the PM's announcement at Glasgow.

India enhanced #NDC is a challenge to the world to step up. We will reduce 1 billion tonnes by 2030; 22% reduction in BAU; per capita will be 2.31 tonnes/as against US 9.4 t/per capita and China 9 t/per capita. No question that this is running the talk #COP26

Reducing 1 billion tonnes of emissions by 2030 and expanding non-fossils capacity to 500 GW are enormous and transformative steps, according to Ajay Mathur, director general of International Solar Alliance. “The Prime Minister has made bold announcements and led India from the front at the onset of the Glasgow meeting.”

India has clearly put the ball in the court of the developed world by proposing monitoring of climate finance in addition to climate action.

The Prime Minister’s announcement is a signal to the developed countries, said Sanjay Vashist, director of Climate Action Network South Asia, to this reporter. “Now the rich countries have to deliver climate finance and technologies to help it achieve the targets.”

I congratulate PM Modi for setting bold climate commitments. But they were driven more by political motivations rather than climate urgency. Developed countries like the UK and US were putting enormous pressure on India to announce its ‘net-zero’ target, and India has now come up with an answer.

“We will keep climate commitments, if you keep financial commitments” seemed to be the buzz word of Modi’s statement in Glasgow. The developed countries are struggling to provide even half of the promised $100 billion annual support to developing countries from 2020. Without this, the ‘net-zero’ and other emission reduction targets promised by the developing block, including India, may remain a nonstarter.

“We need targets within a smaller time-frame,” said Saleemul Huq, a UK-based Bangladeshi climate expert and key advisor of the Least Developed Countries Group, to this reporter. The hype around long-term ‘net-zero’ achievement makes little sense and takes the discussion away from key issues, he added.