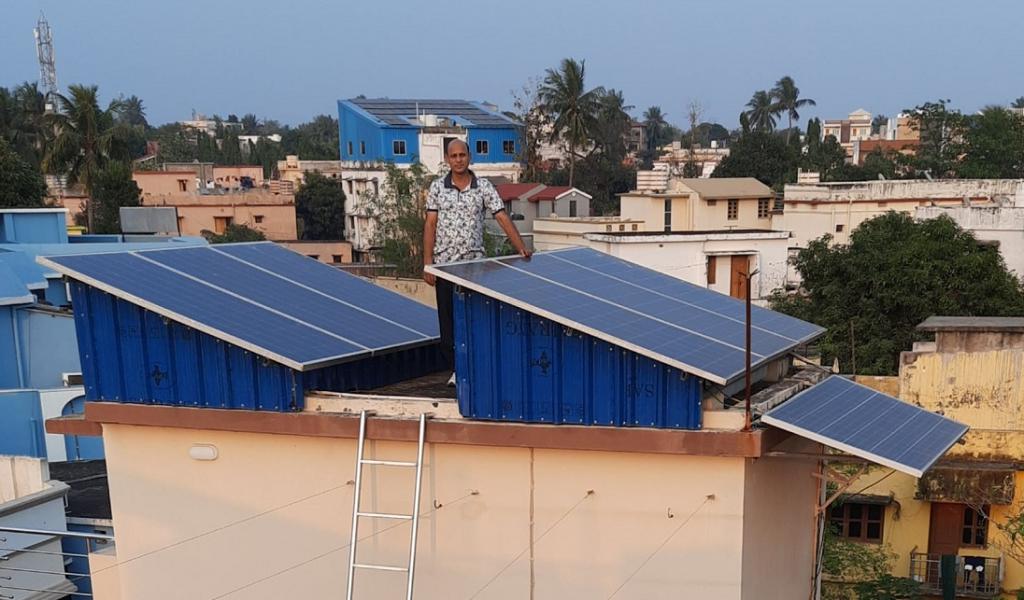 BK Bahinipati, a ‘prosumer’, with solar panels on his roof in Bhubaneswar. Photo: Rakhi Ghosh

The demand for rooftop solar photovoltaic (PV) panels and other solar-powered appliances has risen in Odisha during recent years as people seek to meet emergency needs during disasters and to reduce their electricity bills.

Solar-powered appliances are now popular across Odisha, from capital Bhubaneswar, to remote villages in the state’s tribal areas.

In 2019, when the severe cyclonic storm Fani made landfall near Puri, a coastal district in Odisha, it forced people to live without electricity over 15 days, including in Bhubaneswar.

It had happened before, during the 1999 Super Cyclone. Electricity poles fell everywhere both times.

The difference was that those who had installed rooftop solar panels by 2019, did not have to suffer.

BK Bahinipati, a ‘prosumer’ (producer-cum-consumer) who lives in Bhubaneswar, said: “We saw a power cut for nearly 15 days after a gap of 20 years. My family had some relief from extreme summer since we had installed rooftop solar panels.”

Jayant Sahoo, an engineer at Solar Sack, a solar developer agency, said: “After Fani, people have realised the importance of solar. We are providing additional energy storage battery systems to on-grid consumers so that they can prepare themselves for any future disaster.”

Hence the rise in demand in rooftop solar photovoltaic panels.

“In the last few years, the demand for rooftop solar panels has increased 40 per cent,” Saswat Nayak, manager, Solaries Power, a solar developer agency based in Bhubaneswar, said.

Solar-powered appliances have now come to even hard-to-reach villages of Odisha. Many people in such villages now have solar-powered lights, mostly with help from non-profit organisations. Like the Juangs.

The Juangs, a Particularly Vulnerable Tribal Group, live in the dense forests of Keonjhar district.

“I have never seen electricity in our village since childhood. But the solar-powered home lights have changed our lives,” Sarjan Juang, 32, of Upara Panasnasa village under Banspal block, said.

“Now, we don’t light kerosene lamps, inhale smoke and burn our eyes. We can now spend time together in the evening and are able to recharge mobile phones,” Juang said

Solar cooking stoves have helped women reduce their cooking hours. Kusumi Pradhani, 32, an indigenous Bhuyan resident of Rugudi village said: “These days, I don’t feel exhausted and my house doesn’t fill up with smoke and get blackened while cooking.”

Kusumi and other tribal women of her village have no knowledge of carbon emission and their contribution to greenhouse gases in the atmosphere. But they are happy that their daily drudgery of collecting firewood and spending hours cooking has reduced and no smoke is emitted.

Moreover, they are earning money by using the cooking stoves to sell carbon credits. When SG Foundation, a non-profit working in Keonjhar district, introduced this improved solar cooking stove in three villages (Kantakoli, Bhaliadala and Rugudi) of Banspal block, many tribal women opted for it. 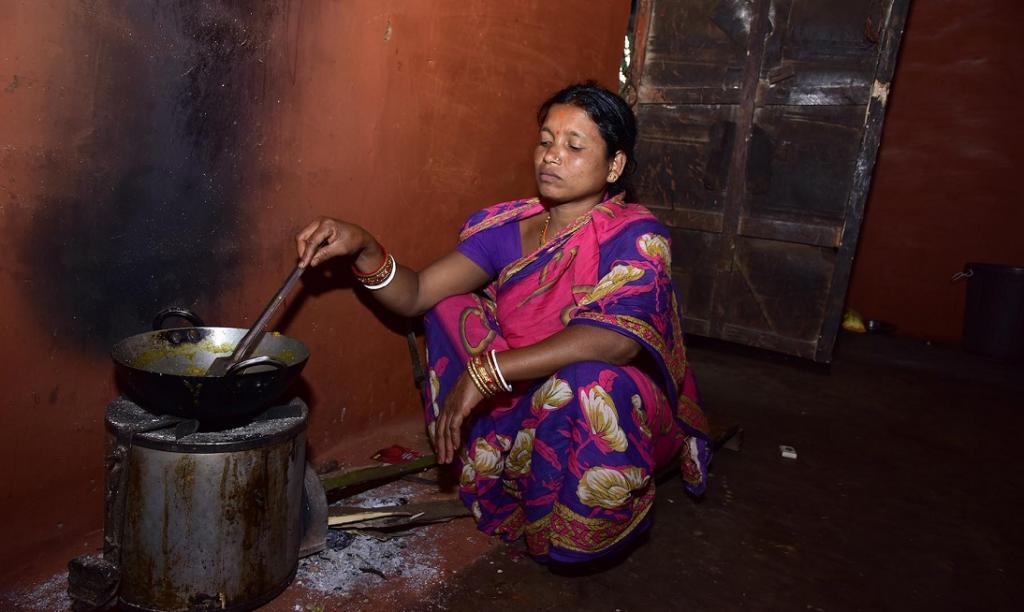 Surjya Pradhani, 45, who has been collecting firewood since childhood, said, “Every day all women including young girls used to walk miles in scorching heat to collect firewood; now that drudgery has reduced. Also, my daughters are taking interest cooking on this improved solar stove rather than the traditional one, as their eyes are not burning and inhaling smoke”.

Odisha plans to install 1,000 megawatt (MW) rooftop PVs by this year. But there are many challenges in both, cities and villages.

The government provides a 40 per cent subsidy to install residential rooftop solar systems. But in most cases, people have not received it yet.

Lack of consumer awareness, difficulty in processing and timely approval of net metering applications and more recently, an increase of goods and services tax (GST) percentage on solar panels are among the problems.

The increase in GST on solar panels from 5 to 12 per cent has had a negative impact on demand, Nayak said.

He explained that a new policy had to be implemented to install virtual net metering to meet this demand in future. A residential society would then be able to buy a plot in a far-off place and install solar panels and offset its bills.

Bahinipati said his electricity bill had become almost nil after he invested a good amount on rooftop solar installation.

But many people are withdrawing from the idea because the initial investment is quite high.

“Some of them are not aware about it (the subsidy). So, they don’t install because the initial investment is high,” Nayak said, adding there was no awareness about rooftop solar in semi-urban and rural areas. Bahinipati said he received 30 per cent subsidy, but after a long wait.

There are issues of maintenance of solar appliances in Odisha’s remote villages. Barapitha, a village of indigenous Santhal and Ho communities just 15 km from Bhubaneswar, was Odisha’s first solar model village.

In 2015, a mini solar plant was established and power supplied to every household. The village of 60-odd households became Odisha’s first 100 per cent solar village.

“This changed the life of our villagers. Our children got light to study, women could work till late evenings and spend time with themselves and men were returning home late. There was no fear of wild animals, reptiles and elephant attacks”, 35-year-old Raghunath Singh,said.

But the plant broke down when Cyclone Fani struck.  “Everything was destroyed — solar panels, batteries and invertors. We didn’t know how to repair, we were not trained and we had no idea whom to contact to repair it,” Basant Bariha, 43, a villager, said.

There are similar stories elsewhere. Ashok Choudhry says, “When we realised we had entered essential services, we felt it is necessary to provide maintenance to fulfill our objective. Thus, the first of its kind IT-enabled monitoring and service provider mechanism RESolve took shape.”

OREDA Stakeholders Engagement and Assets Management System (OSEAMS) is an IT- enabled monitoring mechanism through which stakeholders are engaged and their individual performances are monitored to achieve the goal is sustained on RESolve.

“If we want to continue with international commitment, we must make sure our assets are working for the period they designed for. The biggest challenge in renewable energy is to ensure quality and maintenance service. In RESolve, the registered RE assets are being provided with services”, said JP Jagdev, managing director, Parameters Softwares, the owners of RESolve, the service provider company of OREDA.

He added that his team empowered the community and got feedback from them. “All private and individual RE assets need to be registered so that the state will have detailed data on all assets and their working conditions,” Jagdev said.

Till now, nearly 80,000 RE assets have been registered on this platform.

Presently, registered beneficiaries from any corner of the state can get their equipment serviced by dialing a toll free number. But maintenance services are provided only for five years, though the lifespan of a RE asset is 15-20 years.

“The ministry is completely silent about what will happen to the asset after five years. It should bring a policy on this to extend the services of the assets”, Jagdev added.

He noted: “As Odisha is disaster-prone, there should be a disaster plan before installation of RE assets. Some additional cost should be kept in Capex (capital expenditure) for disaster planning and mitigation; that will help in disaster response.”