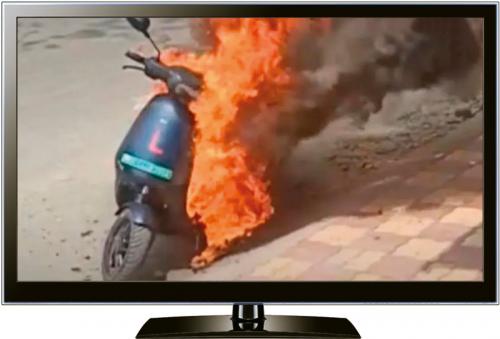 The centre was asked to probe into the circumstances of the fires, which have killed at least three persons in the last year, by the Union Ministry of Road Transport and Highways March 28.

Incidents of e-scooters going up in flames have come as a surprise to many because most manufacturing companies have capable technical teams, which include alumni from India’s reputed institutions.

However, electric vehicle (EV) battery expertise is a relatively new skill in the country. In fact, the EV itself is a new animal and battery is its most important, performance-defining component.

Battery cells operate by discharging lithium ions from the anode to the cathode through the electrolyte. Most lithium-ion batteries use anodes made of graphite, which receives lithium ions as the battery charges, and releases them as it discharges.

The maximum amount of lithium that can be collected on the anode measures the battery’s capacity, defining the distance a vehicle can be driven on a single charge. Information such as the C-rate or charging speed and other factors related to battery health is controlled by BMS, which is an integral part of the battery.

India does not manufacture either BMS or the battery cells. Some companies assemble BMS with imported components while others buy them off the shelf and integrate them with battery cells.

About 90 per cent of fires in lithium ion batteries are caused by an internal short circuit — indicating a failure in the battery pack to manage its components, as well as the inability of a cell to maintain its integrity.

The battery has a thermal management system to contain the heat or fire and software to control it and to communicate with the driver about it. Thermal management in batteries can be active and/or passive.

Most electric four-wheelers have an active thermal management system which involves liquid cooling of the battery. They also use passive cooling methods with phase change material (PCM), a wax-like material that melts when the temperature rises in the cell. The liquid thus formed has the ability to absorb some of the heat, but has limited capacity to stop a fire.

Other passive cooling methods used globally include an intumescent material stuffed within the walls of the pack and between the cells. The material swells up when heated and can act as a buffer against a fire. A combination of active and passive cooling systems offer electric four-wheelers a more efficient way to avoid fires.

But e-scooters, which have a 2-3 kWh battery, are constrained for space within the battery cavity and cannot accommodate an active cooling system. The batteries are typically air-cooled and have PCMs incorporated in the pack. A number of the e-scooter fires included white smoke. That is vapourised PCM being “vented” by the battery.

Accommodating fire-retardant material would increase the weight of the battery that could affect the performance of the vehicle and also add to cost. Manufacturers have the option to reduce the size of the battery and include a cooling system. That would mean a trade-off between safety and performance.

LFP could, in fact, serve as an interim solution for e-scooters that cannot take a cooling system. As scooters are mostly used for neighbourhood mobility and not for long distances, relatively lower energy density could be a trade-off until safer technologies evolve.

E-scooter manufacturers say their two-wheelers and batteries meet the country’s safety standards. But they are reportedly compliant with the older Automotive Industry Standard (AIS) 048 that are used for lead-acid batteries.

The new standards — AIS 156 — released in 2020, are one of the most stringent in the world in terms of battery testing. Compliance with the standard requires vehicles to undergo tests such as vibration, thermal and mechanical shock, external short circuit, mechanical drop test, temperature, overcharge and discharge, withstand voltage and water and fire resistance for two entire minutes.

Even with the new standards in place, the companies may need to hire battery specialists from countries with long-term experience in battery assembly.

Though the Indian Institutes of Technology at Delhi and Hyderabad now offer courses in EV technology, it will take a few years before graduates join the workforce and even then there would be an experience deficit. At the policy level, the government could offer licences to a few players to assemble and manufacture battery packs, as in the case of LPG cylinders.

The battery companies selected need to have the heft and reputation of having successfully managed complex electrical and mechanical systems. This would ensure access to capital for research and development, so that EV battery fires are limited to the controlled environment of a laboratory.

The companies could standardise the battery pack while scooter manufacturers focus on the vehicle. Such a practice would not only limit the number of players that can be held responsible should such an event occur, decoupling the e-scooter and its battery would also promote battery swapping design options.

Indian batteries could be made reliable by building a framework for a reliable predictor of battery behaviour. This can be done by aggregating charging and operations information to create a common battery data bank.

Data collected over several charging events can be curated and made available to stakeholders such as insurance companies, financiers and battery second-life companies to make an assessment of its value.

Such information could be collected from the manufacturer's as well as the customer’s perspective, with guidelines to avoid storage of security-sensitive data. Currently, there is no framework for e-two-wheeler data to be tapped during charging, or to study battery decay.

Who is to blame

The Fire Explosives and Environment Agency submitted its findings on incidents of EV fires in May. Some of the findings: