A 2003 report, Carbon Finance and the Global Equity Markets, identifies changing climate due to rising global average temperature as one of the factors that will influence a company's competitiveness and profitability 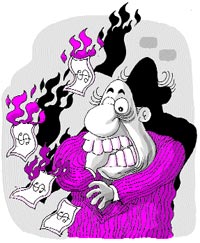 Global warming is set to change the investment climate in the corporate world. A 2003 report, Carbon Finance and the Global Equity Markets, identifies changing climate due to rising global average temperature as one of the factors that will influence a company's competitiveness and profitability. Investors are beginning to revalue companies depending on their exposure to climate change risk, according to the report. Companies that heavily emit greenhouse gases (ghgs), or are most exposed to natural disasters, are at maximum risk of losing investor value.

Based on a survey of top 500 companies in the world (measured in terms of market capitalisation), the report was commissioned by 35 institutional investors including insurance companies and pension funds. It analyses growing pressures on companies to reduce ghg emissions and identifies risks -- on a sector-by-sector basis -- that investors should consider.

Industries with high emissions can suffer as much as 40 per cent in value. Those implementing policies to reduce risk arising due to climate change will have a competitive advantage, boosting their share prices. The report advises early action on averting climate change impacts. For example, rail firms are marketing their services on the strength of their low carbon emissions characteristics; companies like Unilever and Sainsbury have set emission reduction targets; the telecom sector is now pursuing teleconferencing as a way to reduce vehicle transport and emissions.

In the survey, more than 80 per cent of companies contacted recognise climate change as a serious issue. Some instances of financial risk are: the us semiconductor industry, from potential disruptions to crucial components from Taiwan (where weather induced water shortages are jeopardising chip manufacture); and business interruptions due to hurricanes in the Gulf of Mexico, that cause temporary but significant production losses for oil and gas production companies (see table: Most Impact).

Notwithstanding the political process surrounding the Kyoto Protocol, regulations to restrict emissions and trading schemes are here to stay. For instance from 2005, European companies will have to pay 40 Euro per ton of carbon dioxide emitted until 2007 and a penalty of 100 Euro beginning 2008, if their ghg emissions exceed their allowance. Companies lagging behind in managing emissions could face significant penalties.
The report says that future threat to a company's value varies widely not only at sector level but also amongst different firms in the same sector. The reason is that companies and sectors differ in terms of their capabilities to manage risk. For instance, in case of electric utilities in the us, the estimated total cost of reducing ghg emissions intensity by 10 per cent range from over us $1.7 to below us $0.2 per megawatt hour.