Chinese scientists shoot down research on shortcomings of Bt cotton 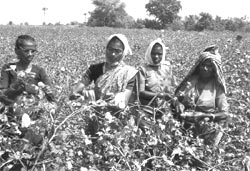 the recent study conducted by China's Nanjing Institute of Environmental Sciences and global environmental group Greenpeace, which claimed that Bt (Bacillus thuringiensis) cotton causes damage to the environment, has no takers in the country. While Chinese biotechnology researchers have unanimously rejected most of the views expressed in the report, some have even contradicted the findings. They state that the insect-resistant form of cotton actually benefits the environment.

Coming three months after India allowed the commercial plantation of Bt cotton, the report had raised apprehensions afresh on the role of genetically modified organisms (gmos). The strong Chinese refutation appears to have, however, considerably allayed incipient doubts that had arisen in India.

According to the study, the transgenic variety of cotton would lose resistance to bollworm -- its primary pest -- within eight to 10 years. It postulated that not only will the Bt toxin cause the death and eventual decline in population of its natural enemies, an upsurge in secondary pests would also be witnessed (see Down To Earth, Vol 11, No 3, June 30, 2002). The institute research further contended that Bt cotton causes serious imbalances in insect ecology.

The Chinese Academy of Agricultural Sciences (caas) is understood to be currently preparing a paper that counters the allegations levelled in the report. It has chastised the state environment protection agency for working with Greenpeace. It is learnt that Guo Sandui, the inventor of Chinese gm cotton, has also disputed the veracity of the research. Sandui says that the biggest environmental benefit of Bt cotton is that it cuts the use of pesticides by more than 80 per cent. Significantly, the transgenic variety already comprises 35 per cent of the nation's crop. So far as the spread of other insects as also disturbance in their ecology are concerned, scientists of the caas Biotechnology Research Institute and caas Institute of Plant Protection aver that the conclusions drawn in the Nanjing report are incorrect . They add that the sample size relied upon is too small. Apart from this, several positive results have either been withheld or doctored to appear negative. The development of resistance to the Bt toxin by bollworm is a well-known fact, but this holds good for pesticides too, say experts. Moves are afoot to delay the resistance process, they add.

Indeed, the Chinese study had left the pro-gmo lobby in India a little shaken. Experts conceded the need for carrying out continuous research and improving the resistance of gm cotton. "Our decision to leave a 'refuge belt' of non-Bt cotton around the gm variant will ensure that we do not face the difficulties that China is experiencing," said Asis Datta, chairman of the review committee on genetic manipulation, and director of the National Centre for Plant Genetic Research, Jawaharlal Nehru University. But he felt that Bt cotton could not be completely overlooked.

Environmental groups, farmers' bodies and agricultural scientists had earlier appealed to the chief ministers of various states to exercise caution on the use of gmos.

And Suman Sahai of Gene Campaign, a Delhi-based non-governmental organisation (ngo), warned: "It is not only targeted insects that will be affected by the Bt toxin, but also the soil and surrounding flora."

However, A M Gokhale, chairperson, Genetic Engineering Advisory Committee (geac), is of the view that since Bt cotton reduces the use of pesticides by 80-90 per cent, its plantation is justified. Sahai suggests that the geac should be more transparent and adds that field trials should be conducted thoroughly to avoid a "monumental ecological disaster".

In China, the controversy seems to have blown over without affecting its campaign to popularise Bt cotton. India, meanwhile, still needs to keep its eyes and ears open as it takes the plunge into the gm era.