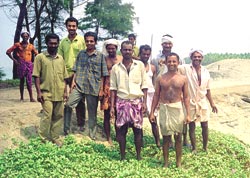 an international study on genetic mutations in people living in the high-radiation coastal belts of southern Kerala has hit the headlines. But for all the wrong reasons. Scientists who conducted the study have not followed guidelines issued by the Union government on transfer of biological data outside the country.

The principal investigators of the research are Lucy Forster and Peter Forster of the Molecular Genetics Laboratory, associated with the University of Cambridge, uk. They collected the saliva of 998 people living in the Charava-Neendakara coastal belt and neighbouring low-radiation areas in Kollam district of Kerala. Research was conducted in the uk to study point mutations occurring in the mitochondrial deoxyribonucleic acid (dna). The tiny stretch of the coastline has one of the highest levels of natural radiation in the world, thanks to radioactive thorium found in the monazite sands in the region (see: 'Sands of Cancer'; Down To Earth, Vol 11, No 11, October 31, 2002).

While the secretary in the Union ministry of health and family welfare is the chairperson of the screening committee, which permits such transfer of data outside the country, the director general of the Indian Council of Medical Research (icmr) is the co-chairperson. The head of the international division of icmr, SCS ehgal, too is a member of the committee. "It is unethical for anyone to take biological samples out of the country without the prior approval of the screening committee," says Sehgal.

The guidelines, issued by the Union ministry of health and family welfare in November 1997, clearly state that transfer of any human material which has potential use in biomedical research needs permission from the concerned authorities. A few exceptions, however, are transfer of such material from an individual for diagnostic or therapeutic purposes or for use in laboratories collaborating with the World Health Organisation (who).

Interestingly, the 1997 guidelines are not legally binding. They are also primarily applicable for medical research being carried out only by those Indian scientists -- working in public or private institutions -- who are collaborating with scientists or institutions abroad. But neither do the Forsters have any Indian collaborator, nor did they use public funds from either of the countries to carry out the studies. Peter Forster claimed that since his wife -- a native of Kerala -- is the first author of the paper, it is in a way an Indian study. "Besides, this study was not funded by any source, except our own financial means," he said. But his claims can be contested on the ground that though his wife is an Indian citizen, the research was not conducted in India.

Notwithstanding his claims, the issue here is the export of biological material from the country without the permission of the authorities. The study may not have any commercial purpose, but the fact remains that the country does not have any laws to prevent such incidents from recurring. Nor does it have any mechanism to monitor the trans-boundary transfers of such biological materials that have medical significance. According to Debi Sarkar, a leading biological scientist from the University of Delhi, there is very little awareness among Indian scientists about the implications of such transfer of biological matter outside the country. These include infringement of intellectual property rights.