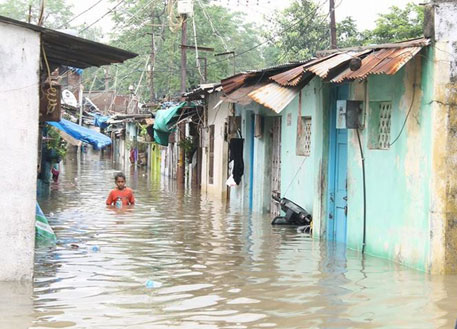 Water released from the Ajwa reservoir has added to the miseries of people of Vadodara in Gujarat, who are already reeling from flood. River Vishwamitri in the city is in spate following heavy rains that lashed the region on Monday.

Even though the district did not receive much rainfall on Tuesday, water released from the Ajwa reservoir caused the river to swell further and divide the city into two parts. The western part of the city was cut off completely from the other part.

Vishwamitri is presently flowing at 10 metre (m) while the danger level is 7.8 m. Several parts of the district are completely inundated and over 13,000 people had been evacuated from cities and another 10,000 from the villages till the last reports came in. Both sides of the river in Vadodara city were heavily encroached and in certain parts of the city the river looked more like a narrow drain.

The gates of the Ajwa reservoir were closed early on Thursday morning but the water in Vishwamitri did not recede because of the Dhadhar river which is in spate and flowing at the level of 10.5 m. The gates were opened on Monday after level of water in Aajwa reservoir, upstream of Vadodara, rose above 64.5 m. The water level in the reservoir has reached such a height after 35 years. The Vishwamitri meets Dhadhar downstream of Vadodara. The level of Dhadhar increased due to overflow at Dev dam.

India Meteorological Department (IMD) has said that more rainfall is expected in Gujarat and Maharastra because of a well-marked low pressure. The forecast has spread fear as more rains could cause further damage to the flood-hit district.