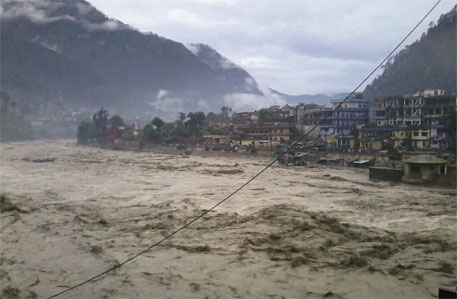 HEAVY rainfall leading to flash floods in Himalayan rivers in July-end devastated three states—Uttarakhand, Himachal Pradesh and Jammu and Kashmir. It claimed 34 human lives and damaged property extensively. It also brought into focus the precarious condition of more than a dozen dams in the region.

Within just one week, starting August 1, these states received about half the rainfall they receive over an entire year—Uttarakhand received 44.6 per cent of its annual rainfall; Himachal 51.8 per cent and Jammu and Kashmir 55.6 per cent. Uttarkashi district in Uttarakhand’s Garhwal region was the worst hit. The Bhagirathi, flowing much above the danger mark, washed away houses, hotels, roads and bridges. Nineteen labourers working on the Assi Ganga hydropower project in Uttarkashi were swept away by the river which they were trying to harness.

The project itself suffered extensive damage as the powerhouse of its first phase was completely washed away. Of the 19 hydropower projects in Uttarakhand, six—in Dhakrini, Dhalipur, Tiloth, Dharasu, Ramganga and Chirkila—stopped generating power. In all, 15 dams suffered excessive siltation, which drastically reduced their power generation capacity. The devastation made the Uttarakhand government announce the floods as the worst in 30 years. It has also banned further construction of settlements along the river banks.

In Jammu and Kashmir, water of a brimming barrage on Ujh river in Kathua district was released which flooded the banks of Chenab and Ujh in the state. In Himachal, power generation in two projects plunged.

All this puts a question mark on the 15 more hydropower projects announced in Uttarakhand in almost the same areas that have witnessed devastation this year.

The 1,500 MW Nathpa-Jhakri power project in Himachal’s Kinnaur district and the 1,000 MW Karcham-Wangtoo power project in the state’s Lahaul-Spiti district, that boast of generating more electricity than their installed capacity, had to be shut down for more than 24 hours. Heavy rains had increased the silt level in the catchment areas of the dams on the Satluj. From the permissible limit of 2,000-3,000 parts per million (ppm), silt in both the projects increased to more than 6,000 ppm. The projects had to be shut down to allow the silt level to decrease and to avoid damage to heavy machinery, say officials of Jaypee Group, developers of the two projects. Flood water of the bulging Satluj was allowed to pass through the gates of the two dams. Many projects in the region similarly allowed flood water to pass downstream. However, heavy silt increased the momentum of the surging river taking with it almost everything that came its way, be it a bridge, a road, or an entire human settlement. 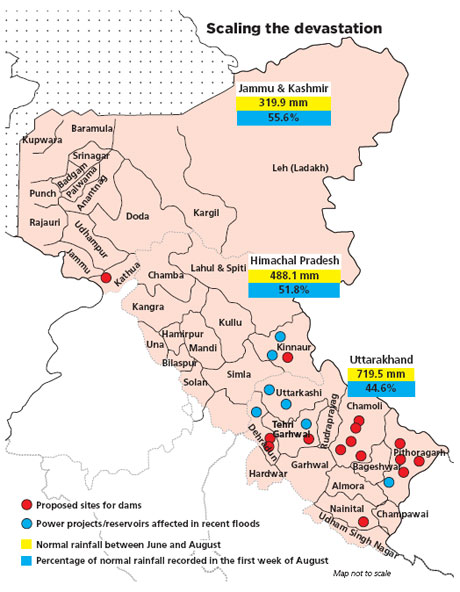 For reservoirs, siltation is a serious problem. At present, most of them in the upper reaches of the Himalaya are heavily silted. The estimated life of a reservoir is two centuries. The Bhakra dam, which became operational just about 50 years ago on the Satluj, has already lost about 50 per cent of its storing capacity. The Jaldhaka dam near Siliguri in West Bengal, in the Himalayan range, is almost completely silted, writes seismologist Arun Bapat in a leading national daily. In fact, many reservoirs are losing their capacity at the rate of about two per cent per annum because of siltation, according to Central Water and Power Research Station, a government body that studies siltation in the country’s big reservoirs.

But siltation is a natural phenomenon. Himalayan rivers characteristically carry with them large amounts of silt. This is because most rivers emerge from the arid terrain of the inner Himalayas. “There is profound surface erosion in the lee of the orographic (mountain) barrier where barren landscapes are susceptible to intense rainstorms,” states Bodo Bookhagen, geographer at the University of California, Santa Barbara. “Extreme events in the Himalaya are more common in the dry interior regions than the wet exteriors,” he adds. So what caused the devastation?

Was it monsoon that played truant? Experts think otherwise. In fact, the region has experienced deficit rainfall this year, as much as the India Meteorological Department (IMD) had predicted. Satellite pictures of the Himalayan region during this time show monsoon clouds in the north and south direction. When these clouds moved northwards, a favourable condition for rains was created because the Westerlies had already pumped a lot of moisture here. This led to the rainfall, which is not unusual, says D S Pai, director of National Climate Centre and lead forecaster of monsoon.

“Increased human activity on the floodways without basic understanding of the river course is the reason for the devastation,” says K S Valdiya, geologist and former member of scientific advisory committee to the prime minister. A river is flanked by floodways, and then floodplains, on its either sides. During heavy rainfall, rivers overflow into the floodways. In the past, people understood this nature of rivers, he says. But over the years, farming activities have diminished the difference between floodways and floodplains. “Landslides and floods are more pronounced now because people have built houses on the rivers’ pathways and have uprooted trees that retained water,” he says. Floods, says Pai, are more noticeable now because the upper reaches of the mountains have new observation points.

A river takes about six months to reach the plains. The first showers percolate through the ground to fill up the springs which join streams and later become a river. Now, the soil cannot hold the water, leading to surface run-off and erosion, Valdiya adds.