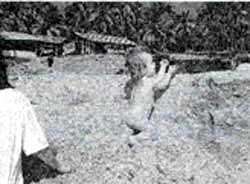 The Goan government is visibly at the forefront in proclaiming a zealous adherence to the national Coastal Zone Regulation (CRZ) laws, mainly due to pressure from local greens. However, an interim draft of a confidential report, prepared last month by the Union ministry of environment and forests (MEF), alleges that the state government is jeopardising Goa's famed beaches by allowing unwanted construction.

CRZ regulations prohibit hotel and resort construction within 200-500 metres of the high tide line. But the state government has permitted the construction of several multi-storied residential projects, intended to be "resort homes" in the buffer zone. The report points out that this subterfuge is particularly rampant in the more popular tourist destinations like Dona Paula and Calangute.

Instances of the more blatant violations are listed. The state authorities have permitted the Ramada-based Goa Renaissance Resort to extend its structures up to 152 metres of the coastline. Even more notable is an ambitious plan for an office complex on the beach between Bogmalo and Panjim, being promoted by the state's Economic Development Council. The project is being touted in promotional literature as "the Nariman Point of Goa". The state government has already targeted coastal wetlands and mangrove areas for conversion. The MEF has asked that the report be finalised next month after a second round of checking out the CRZ violations.