Return of the cheetah 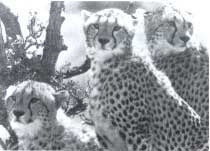 JODHPUR district in Rajasthan, which recently captured headlines for being the place where the cinestar Salman Khan was arrested for killing a blackbuck, is all set to become famous for wildlife conservation. The World Wide Fund for Nature (WWF) will be developing a cheetah breeding facility at the Machiya Nature Reserve near Jodhpur. Cheetahs were last spotted in India in 1960. If the propose is implemented as planned, cheetahs will be found in Indian forests in two years' time.

The project will be assisted by the Cheetah Conservation Fund (CCF), Namibia, which will also share knowledge on breeding and conservation of cheetah. Namibia has a population of around 2,500 cheetah's and the topogra- phy very similar to that of Machiya.

Efforts to reintroduce cheetahs in India began in the 1980s. But it was soon concluded that India does not anymore possess the habitat or the prey needed for the survival of cheetah. Once again, in 1994, the possibility of reintroducing cheetah in Machiya was discussed by the WWF experts. In the following year CCF director Laurie Marker Kraus visited Jodhpur and concluded that it had a great potential for sustaining and breeding cheetah due to its location, size, natural habitat and water availability.