Review of the book The corporation that changed the world 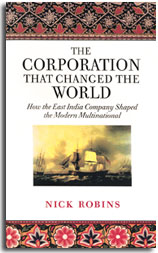 The corporation that changed the world How the East India company shaped the modern multinational Nick Robbins Nick Robbins has done a commendable job of unravelling the politics of how the East India Company colonised the East. The story is not particularly enlivening. It starts with the merchant-capitalist phase of imperialism, progresses, briefly, to the post-industrial system of imperial regulations. Unfortunately, it does not go into the Hobson-Lenin thesis of under-consumption and finance capital being the highest form of capitalist exploitation in effect imperialism.

The devil is in the detail. Robbins picks out the intimate goings-on in Leadenhall Street, the headquarters of the company that boasted among its personnel great figures, James Mill and Jeremy Bentham -- which makes up the utilitatarian brigade. We get a ringside view of the intellectual big hitters there is a detailed take on Edmund Burke, Adam Smith, a man called Karl Marx, and a host of petty players -- Phillip Francis, the Wellesley brothers, Tom Petty and other monetarists.The most brilliant expositions of the intellectual lineaments of the East India Company's intellectuals roots comes through a French monograph the impressive tome compiled by Ranajit Guha in his A Rule of Property for Bengal, documents the internecine politics of the court in Bengal and the ideological incidents attendant upon Lord Cornwallis's assumptions that went behind the creation of that great institution of property rights in Bengal -- the Permanent Settlement.
Though Robbins's book has great expository power, especially in its marshalling of detail, there are gaps. Let us begin with the larger perspective, already alluded to. While Robbins makes a cogent case about de-industrialisation in Bengal, he dwells too long on the mercantilist phase of imperial exploitation. The treatment of globalisation remains imperfect, because it does not venture too deeply into the final phases, and does not look at studies that have identified global systems from the mediaeval ages.

Leaving out Immanuel Wallerstein, the theorist par excellence of globalisation, does not sound like deep research. This researcher also regrets the elision of seminal works like those of Andre Gunder Frank and the Latin American neo-imperialist theorists. However, there is a reference to T R Malthus, the arch-ideologue of classical economists. Malthus trained prospective civil servants going out to India from Haileybury College. The training was mostly classicist, linguistic and generally not very useful.

Why? The debate on globalisation never kicked in, really. Most important is a fundamental issue trickledown is bunkum. Robbins makes the point. Others have made it too. A public health study, by a professional, has made it clear that absolute levels of endowments don't matter that much. What really matters is levels of inequality social disparity the researcher argues makes for low levels of self-esteem. On us $1,000 a month you don't really want to compare yourself to Steve Jobs's big-buck night out.
The transition that Robbins seeks to make between the mercantilist origins of the East India company and his unsure navigation in the age of industrialisation is a minor problem. The bigger problem is the reluctance to delineate the lineaments of globalisation.

Having said that, the attention to detail is impressive, even if some categories remain somewhat vague. One remains somewhat tantalised about categories -- radical, liberal, conservative. What do these really mean in colonial contexts?