Revival plan for a disappearing tree 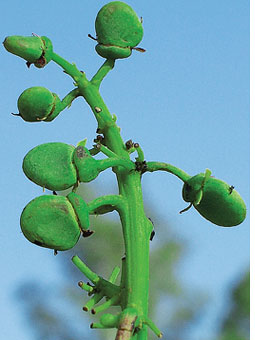 an important tree species is fast disappearing in the Western Ghats. A 'recovery plan' is currently underway for the tree, which is used primarily as a traditional cure for skin diseases, though not on a commercial scale. There are only 100-odd trees left. The freshwater swamp species, locally called kan holegar, is found on four isolated pockets in the Western Ghats.

Scientists in Karnataka are working on a relatively cost-effective recovery plan backed by the department of biotechnology under the Union Ministry of Science and Technology. In an experiment, the researchers grew the seedlings in their laboratory first and then planted the seedlings in the species' natural habitat--swamps. In a related experiment, they planted seeds directly in the swamps.

They found that 80 per cent of the laboratory-cultured seedlings survived, whereas the survival rate for the other lot was only 23 per cent. The researchers say the cost will not be as high as regenerating it through tissue culture, another way of increasing the species population. The project, aimed at a fair population of the kan holegar (Semecarpus kathalekanensis), is expected to be completed by 2010.

The researchers, in their first progress report to the department of biotechnology in October 2007, said they had successfully established the species in five new locations in Karnataka and one in Kerala. Earlier, the species was found only in the Uttar Kannada district in Karnataka. Their report also said that there is little chance for the tree to regenerate naturally since very few young individuals were left.

The scientists got interested in the tree species, which belong to the cashewnut family, in 2000. During their routine studies on the species, they found that the ecologically-important tree was disappearing. "Growth is restricted to within a 20-sq km area in Uttar Kannada," says R Vasudeva, associate professor at the College of Forestry in Sirsi, Karnatak. He is the coordinator of the recovery plan.

Vasudeva and co-researchers working on the revival plan say there are several local factors which may have pushed the tree to the verge of extinction. The most prominent among them is that water from its habitat is being used for areca nut plantations nearby (see 'Forest Grump', Down To Earth, October 31, 2003).

The tree exchanges genetic material through cross pollination. Presence of areca nut may have disrupted the process, the team says. "Due to physical barriers such as the areca nut plantations, the gene flow is restricted," says R Uma Shaanker, professor at University of Agriculture Sciences, Bangalore. In the absence of cross pollination conditions, the only way seeds are produced is through inbreeding (between trees with the same genetic make-up). As a result, they have lesser genetic variability, which makes them less hardy and hence vulnerable to changes in the environment.

Among the reasons for the decline in the population of the Semecarpus is change in the timing of flowering; it inhibts the ability to reproduce. G Ravikanth of the Ashoka Trust for Research in Ecology and the Environment, Bangalore, in a study, has seen that the tree has started flowering a month earlier than usual. The flowering season normally begins in late December and continues till February. Such changes of timing in flowering also influences the number of fruits the tree can produce.

It is known that the average number of fruits is normally four times more among the trees that flower at the same time than those that do not. "Only 33 per cent of the mature Semecarpus trees flower in synchrony," says Vasudeva. Some scientists suspect that changes in climate could be affecting the timing of flowering.

The decline in the tree population is linked to the absence of some key pollinators of the tree such as the sunbird, the black drongo, the hill Myna and--especially--a butterfly called Malabar tree nymph. Large quantities of pollen are usually found on the proboscis and legs of the butterfly. The butterfly is also endangered. Researchers say more studies need to be conducted to establish how the decline of the pollinators has influenced the decline of the tree, or is it the other way round.

Among other factors, over-grazing has also affected the growth of the seedlings of Semecarpus. Cattle feed on fruits and the seedlings.