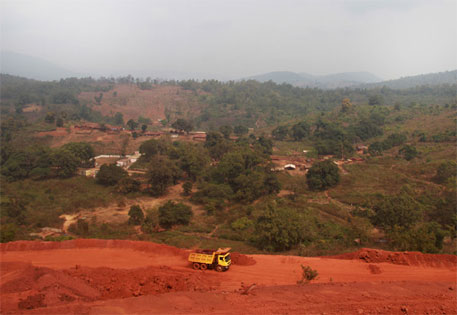 Just as the Supreme Court last week suspended work in several mines in Odisha for operating without valid  approvals, further violations in the state have come to light, this time contravening forest laws. The recently released minutes of meeting of Union environment ministry’s forest advisory committee (FAC) shows that two mining projects of Steel Authority of India Limited (SAIL) and Odisha Mining Corporation Limited (OMC) have flouted an important condition of approval for stage 1 or in-principle clearance for forestland diversion.

The FAC meeting held in April-end has recommended revocation of stage 1 approvals for the two projects for delaying compliance of the condition of compensatory afforestation, stipulated in the first stage of approval.

As per the provisions of Forest Conservation Act, 1980, forest clearance for development projects involves a two-stage approval. In stage 1, upon review of the proposal, the Union environment ministry gives an in-principle clearance by stipulating conditions, such as compensatory afforestation and expenses for mitigation of probable environmental damage. Following this, the state government submits a report, stating compliance of the stipulated conditions by the project proponent. The ministry gives its stage 2 or final approval based on this report.

Guidelines given under the Forest Conservation Act further specify that in case there is a delay of more than five years in states reporting compliance with conditions stipulated in stage 1 clearance, the approvals will be summarily revoked. Both SAIL and OMCL took much longer than the stipulated five years.

FAC further noted that in absence of compliance of stage 1 conditions, SAIL was not given a final forest clearance by the ministry. Nonetheless, SAIL has been using the forestland in the mine lease area for processing, storage, and transportation of iron ore from their adjoining mining lease. The committee has said that the state government should immediately restrain the user agency from using the forestland till required approval under the Forest Conservation Act is obtained. But an approval will require submission of a fresh proposal that will be considered de-novo.

FAC has made the same observations regarding the chromite mining project of OMCL. Stage 1 clearance was given to the agency in September, 2000, and compliance report is still awaited.

Besides revoking in-principle clearances, FAC has also sought action against the user agencies for violation of regulatory provisions and against erring officials who allowed SAIL to continue with such activities.

Officials of the Odisha forest department informed that no communication had been received from the Union environment ministry so far regarding the observed violations and measures to be taken. But it was evident that the state department had little clarity about the regulatory provision, that a response regarding compliance of conditions of stage 1 approval should have been received by the Union ministry within the five year period.

Activities at the iron ore mine of SAIL involving the forestland in case has also been found to be illegal. Referring to the Supreme Court judgement in the Goa mining case, the FAC members in their discussions pointed out that the agency has been carrying out mining activity illegally without a valid approval. The first mining lease of the Bolani iron ore mine expired in 2002.

However, without a second renewal in hand, the agency has been continuing with its activity under the presumed “deemed extension” clause Rule 24A(6) of the Mineral Concession Rules of 1960.

The SAIL project’s violation falls in the ambit of the observation made by the Supreme Court last week with regard to illegal mining. The SAIL project has been operating on the pretext of having obtained “second and subsequent renewals” without any such order being passed by the state government. The court order has clarified that the deemed extension clause as under Rule 24A(6) of the Mineral Concession (MC) Rule, 1960, is only applicable for first renewals of mine leases, but not for second and subsequent renewals. Conditions for such later renewals should be considered under the provisions of Section 8 (3) of the Mining and Minerals (Development and Regulation) Act, 1957, which says that the approval for second or subsequent renewal of a mining lease will be given by the state government (s) only if they consider that such renewal is necessary in the interest of mineral development, and reasons are recorded appropriately by the state government for the same.

Similar violations has also been noted in the SAIL project for development of mining infrastructure in Toda reserve forest under the Bonai forest division of Sundargarh district in Odisha.

Whether SAIL can continue with its mining activities in these leases now depends on the state government, which has been directed by the Supreme Court to consider all renewal applications at the earliest and dispose them of within six months.