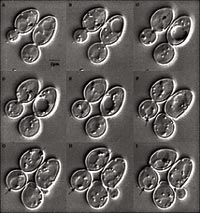 it is quite easy to undo the long process of evolution, a recent experiment shows. Just by rearranging the dna of a yeast species, researchers have turned one species into another. The genetic manipulation has answered a troublesome question: how species form?

Speciation -- the evolution of one species from another -- is an excruciatingly slow process. Often, researchers are left with no alternative, but to intensely study fossil records and sift through the genomes of organisms. "It's a retrospective and passive analysis," says Stephen Oliver of the University of Manchester, the uk.

Until now, that is. Oliver and his team have engineered the chromosomes of brewer's yeast Saccharomyces cerevisiae to make it similar to a related species S mikatae. Essentially, they have reversed a process by which one species splits into two.

The hallmark of different species is their inability to mate and reproduce. This 'reproductive isolation' occurs when fragments of dna accidentally swap between an individual's chromosomes and 'chromosomal translocation' occurs. In yeast, for example, if a mutated individual mates with a normal one, then half the spores formed will have mutated dna, and will be less successful in reproducing than their parents. This means that the mutated individual has become somewhat isolated, in a reproductive sense, setting it on the path to become a new species.

S cerevisiae and S mikatae are thought to have diverged in this way. Their genome sequences are very similar, but parts of their chromosome have been swapped in one species. When they mate, they produce sterile hybrids. But there was no way of verifying if chromosomal translocation is what actually drove the species apart.

To find out, Oliver's team moved chunks of dna of S cerevisiae's chromosomes, placing them in the same order as they appear in the genome of S mikatae. They then mated the two.

When the two species mate naturally, less than two per cent of the spores are viable enough to form colonies. But after the genetic tinkering, 20-30 per cent of the spores were producing colonies. By rearranging their genomes, Oliver's team had in effect turned the two species into one, proving that chromosomal translocation is partially responsible for keeping the species reproductively isolated.

"This study is the first that has directly tested a hypothesis related to speciation," says evolutionary geneticist Ken Wolfe of the University of Dublin, the uk. This is a radical change in how evolutionary processes such as speciation are studied in the laboratory, says Oliver. Previously, researchers had to infer how complex behavioural traits drive insect species, such as the fruit fly, apart.

Oliver's team is now using the technique to create new yeast strains. They are comparing the new strains with natural ones. By doing so, they hope to understand whether the exact location of genes on the chromosomes is an accident of evolution, or if it confers a selective advantage on the organism. "It's a much proactive way of studying evolution," says Oliver.