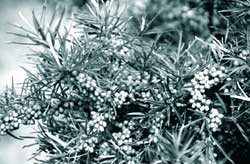 the natives of Ladakh recently earned a huge profit through direct auctioning of the processed pulp of seabuckthorn (Hippophae rhamnoides var turkestanica) berries. The Ladakh Autonomous Hill Development Council (lahdc), through cooperatives formed among local communities, sold nearly 86,000 kilogrammes (kg) of the pulp to Arctic Bio-Pro Limited, a Delhi-based company. The people earned Rs 15 per kg of berry collected and the lahdc a profit of Rs 10 lakh.

Leh Berry, a popular brand of seabuckthorn nectar, was in the news a few months ago following the detection of a major financial scam involving two former top officials of the Ladakh Food Limited (lfl), Leh Berry's manufactures (see 'Exposed', Down To Earth, August 31, 2004). Besides the scam, the matter also brought to light other problems in the manufacture of seabuckthorn juice. It was alleged that the natives who collected seabuckthorn berries for the lfl got a very small share of the profits. In contrast, with the cooperatives taking over the pulp-making process, the people have got direct ownership of the natural treasure. This is expected to raise the local economy to new heights.

"The cooperatives collected 1,34,516 kg of berries from Nubra and Leh blocks of the district worth Rs 20,17,740 within 10 days and 86,010 kg of pulp was extracted," says Tadbar Joldan, deputy registrar, cooperative societies, Leh. "It is estimated that so far we have been able to extract only 10 per cent of the total crop so the scope of further commercial exploitation on scientific lines is tremendous." But Joldan warns that the excessive and reckless thrashing of seabuckthorn plants by collectors in many areas could reduce or kill their fruit bearing capacity.

D K Mittal, lfl's former chairperson who was dismissed for financial fraud, had bought the patent for a newly formulated Seabuckthorn juice technology at the Defence Research and Development Organisation's Field Research Laboratory (frl) in Leh and came up with Leh Berry. frl has now transferred the technology to Arctic-Bio Pro Ltd, which has also got the right to manufacture a herbal tea with seabuckthorn leaves as the main ingredient. frl scientists have formulated the technology for making the anti-oxidant enriched herbal health tea, which also contains other indigenous medicinal plants growing in the region. They claim that seabuckthorn berries are the richest source of beta-carotene, a biochemical that improves the immune system. The scientists are working at preparing seed oil, pulp oil, fruit oil and even seabuckthorn powder.