Rise in medical education fees on the cards

Prompted by a financial crunch, the ministry of health is considering raising fees in medical colleges to recover costs 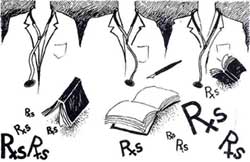 ASPIRING doctors, watch out. A 1,600 per cent hike in medical education fees is in the air. The Union ministry of health (MOH), in a bid to recover a part of its expenses, is considering allowing medical colleges to raise fees from the negligible Rs 300 or so a year now to Rs 5,000.

A joint-secretary in the MOH says the move to hike the fees is prompted by a financial crunch, especially at the state level. Seventy-five per cent of the medical colleges in the country are run by state governments and the rest are run by MOH or are privately imanaged. While MOH-run colleges are not affected by budgetary cuts, education in these institutions is still subsidised heavily.
All-India Institute of Medical Sciences principal S K Kakcer estimates Rs 2,400 crore are required annually to run the 123 government-managed medical colleges in the country. The Rs 780 crore allocated in the Union health budget this year and an equal amount from the states are "way below what is required to run these medical colleges properly," he adds.

The University Grants Commission (UGC) and the Medical Council of India (MCI) are calculating the cost break-up of medical education, an exercise not undertaken previously. Costs are being determined under various heads, such as salaries, buildings and equipment, chemicals, water, and power. The exercise is expected to be completed in six months and will form the basis on which the MOH will take a decision on raising fees.

Says Hari Gautam, principal of the Sarojini Naidu Medical College in Agra, "Rough calculations show a medical student pays a total of Rs 670 per year, whereas we spend around Rs 1 lakh on each student. Why should the government subsidise medical education when most of students enter private practice? Students should meet the full costs of medical education," he says.

Authorities agree that fees need to be increased very substantially. Says UGC chairperson B V Reddy, "Even Rs 5,000 a year is too little. Most students earn much more once they start working and so they can be made to pay more by taking loans."

Fee-hike advocates cite other reasons. Says MOH advisor Ravi Duggal, "A sizeable percentage of students go abroad after getting their MBBS degrees without showing any sense of obligation towards their home country. This alone is reason enough to raise fees."

Duggal also feels MBBS degrees should be awarded to only those students who serve a bond period in India. "This would ensure students repay at least part of the investment made by society and the college in making them doctors," he says.
Medical students are unhappy about the proposed hike and feel it would only put medical education out of reach for most aspirant doctors. Students at Maulana Azad Medical College in Delhi say this would result in a "Mandalisation of medical education".

A senior MOH official counters this view and says that along with a fee increase, the government will introduce scholarships on the basis of financial need and merit. The 300 seats reserved in government-run medical colleges for candidates chosen by the Union government can be allotted to deserving candidates. This, feel MOH officials, will safeguard the interests of poorer students. A health policy observer from the Voluntary Health Association of India also feels if medical education fees are raised, private colleges could recover their costs and thereby capitation fees.