Rise of wives of don-politicians

The Supreme Court order of last July, barring convicted persons from contesting elections, seems to have given rise to a new order in politics in Bihar. This can be gauged from the new saying circulating in the political corridors: behind every don-turned-politician there is a wife.

These wives are scripting a new story of women empowerment, albeit not the desired one, in Bihar.

As many as six wives of don-politicians are contesting the ongoing Lok Sabha elections as “dummy candidates” for their husbands, while some of the husbands cool their heels in jail (see table for list of such candidates).

One of them is Krishna Yadav, a former national-level athlete and wife of dreaded don Ranveer Yadav, who has served sentence in jail and by law cannot contest for the next five years. He was in news last year when he snatched the carbine of a policeman when the car cavalcade of chief minister Nitish Kumar was attacked by protesting teachers on September 27. 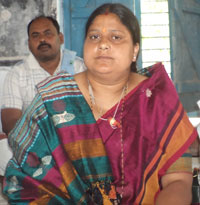 Yadav fired in the air to scare away the protesters. Senior police officials remained mute spectators as the former MLA flexed his muscles. Yadav’s act was enough to explain who wields the law in Khagaria. His act went unpunished.

The don is also an accused in the 1985 Lakshmipur-Taufir Diara carnage in which nine people were killed.

Lalu Prasad Yadav-led RJD and Sharad Yadav-led JD(U) are  rival parties. But these political differences are nowhere to be seen in Ranveer Yadav’s household.

While Yadav was showing his muscle power in the rally, a desperate don, Vijay Kumar, alias Munna Shukla, showed his loyalty to chief minister Nitish Kumar in his own unique way.

Handcuffed Shukla was seen openly distributing pamphlets in support of JD(U) Adhikar Yatra while he was being produced in a court in Muzaffarpur.

Shukla is facing over a dozen cases of murder, kidnapping, extortion and is lodged in jail for over a year. He was also convicted for the murder of a minister, Brij Bihari Prasad.

Shukla has pitched his wife Annu as an independent candidate from Vaishali.

In Khagaria iself, don Pappu Yadav, four times MLA from Madhepura and Purnea Assembly constituencies, was earlier accused for murdering Ajit Sarkar, a CPI leader from Purnea. Yadav has a reputation for wiping out Rajput ganglords in the district.

His influence still instills fear among people in the district though he has been exonerated by the court from all criminal charges. Pappu recently joined RJD and his wife Ranjeeta Ranjan is contesting from Supaul constituency, adjoining Khagaria, on Congress ticket. 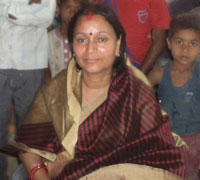 Pappu’s arch rival, Anand Mohan, a former member of Parliament (MP)  convicted for the murder of former Gopalganj district magistrate, G Krishnaiah, is known for unleashing kidnapping terror in the state in the 1990s. While Mohan is in prison, his wife, Lovely Anand, is contesting from Sheohar on Samajwadi Party ticket.

The ‘king among dons’, Shahabuddin, is also fielding his wife this time. He is four time consecutive MP from Siwan on RJD ticket and has a reputation for slapping and beating up police officers. He is also called “law of Siwan”, because he used to hold kangaroo courts to dispense “justice”.

A police raiding teams had to fight a gun battle with the don and his men for over 10 hours a few years back. He is facing over a dozen murder charges, including attempt to murder of superintendent of police, Ashok Singhal. Shahubuddin and his men are also blamed for hurling bomb in a local court after the magistrate convicted him in kidnapping case.

Another don, Surajbhan Singh, three-time MP from Lok Jansakti Party (LJP) ticket, had scores of criminal cases lodged against him. He has been convicted in the murder of a farmer, Rami Singh. His wife, Veena Devi, is contesting in his place on LJP from Munger district.

The Supreme Court order that bars convicted persons from contesting elections was supposed to bring to an end the culture of “don-o-cracy” in Bihar. But it looks like these dons may well continue to rule—through their wives.

Abhay Kumar, a political consultant points out that in 1980’s political parties won election with the support of dreaded criminals and ganglords. Criminals then sidelined the politicians and started contesting elections themselves in the1990s.

Is this women's empowerment?

The apex court order did try to clean up the electoral system, but then it has again been stalled by dons who have pitched their wives into the electoral fray. “This parliamentary election, women's empowerment has been exploited and tarnished,” Kumar added.

“The choice of voting was and is always with the voters. Now, after so many reforms we have come full circle where voter awareness is the only choice to wipe out don-o-cracy to maintain democracy,” he said.

In Bihar, RJD chief, Lalu, started the trend of making his wife take his place nominally. When Lalu was convicted in the fodder scam he made his wife, Rabri Devi, chief minister of Bihar.

Judgement: Judgement of the Supreme Court of India regarding convicted persons standing for elections, 10/07/2013