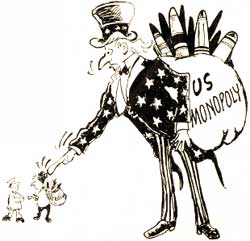 Act 11 (26 April): Prime Minister P V Narasimha Rao assures Parliament that the contract has neither been suspended nor cancelled even as U R Rao, chairperson of the Space Commission, returns from his visit to Russia with tidings of disappointment.

Act IV (5 May): Germady Burbulis, Russian secretary of state, assures India of Russia's commitment to the contract even as USA renews its threat to impose penalties if the deal is not cancelled. But Russia will invite "neutral international experts" to look into the issue to assuage USA.

THE issue at stake is the sale of two cryogenic engines by Russia to India to help power rockets that can put 2.5 tonne communications satellites into an orbit 36,000 km above the equator - a point at which gravity ensures that satellites rotate at the same speed as the earth. Such satellites can greatly boost communication services.

But both USA and its partners in the 18-member Missile Technology Control Regime (MTCR) contend that the Indo-Russian deal is inconsistent with the MTCR, which was set up in 1987 to prevent the transfer of missile technology to non-member countries. The Russian republic is not a signatory to the accord, but has recently agreed to abide by its guidelines. In USA, the National Defence Authorisation Act of 1991 provides for penalties for such transfers.

The US law specifies that organisations that import or export such missiles will be penalised. Thus, both Glavkosmos of Russia and the Indian Space Research Organisation (ISRO) will be blacklisted if the deal goes through. The penalties, would involve suspension'of access to US technology which requires export licensing in USA, and suspension of access to US government contracts.

For India, the US move to scuttle the deal has come as a bolt from the blue. India had wasted precious years negotiating with France and USA to obtain the Low earth engines. By the time orbit the deal with the rest while USSR was Orbit over the signed, the Soviet poles state itself was with erring away.

Stationary There is considerorbit over the able anger against equator USA amongst Indian officials and scientists. "The US objection to the deal being inconsistent with MTCR is pure baloney", says K Subrahmanyam, former director of the Institute for Defence Studies and Analyses.

Cryogenic engines are almost useless for missile launches in war for the simple reason that these must be fuelled at least 90 days before they can hit the sky. In modern warfare, solid fuel stage missiles with or without one liquid fuel stage are preferred for instant delivery, argues Subrahmanyam.

The delay in delivery of the cryogenic engines can push into the next century India's plans to launch communications satellites on its own. India's space programme is already lagging behind schedule. India is currently developing a rocket called the A u g m e n t el d Satellite Launch Vehicle (ASLV which had two abortive flights in TEKSHAW 1987 and 1988. The third flight, scheduled this year, is expected to be a success, say scientists. The next Indian advance in rocketry will be the 0-61ar Satellite Launch Vehicle (PSLV'@, whose scheduled flight later this year may be delayed because of technical snags. The PSLV will evolve into the Geostationary Satellite Launch Vehicle (GSLV), for which the Russian cryogenic engines are needed. The cryogenic engine will form the second stage of GSLV. All the other stages have been finalised and the GSLV design itself was frozen last year on the assumption that the Russians would supply the cryogenic engine. A failure to get the engines is likely to set the GSLV programme back by at least 10 years and thereby impede the efforts to achieve self-reliance in launching multipurpose satellites, say Indian experts.

The cryogenic engine, which uses a mixture of liquid oxygen (as oxidis er) and liquid hydrogen (as fuel), pro vides, a very high thrust so that with the same weight it can carry much higher payloads than engines using either. solid or liquid propellants. Moreover, it is cheaper than boosters using 'liquid fuels like nitrogen peroxide or UDMH.

Indian scientists claim that they can de-Mop the cryogenic technology on their own. But funds may prove to be a major constraint and time scheduling seems impossible. The research effort has so far been limping along. If the targets scheduled in the mid-1980s had been met, the GSLV should already have been launched.

The entire series of INSAT-1 communication satellites and IRS-1 remote sensing satellites have been launched on US, European or Soviet rockets. While the IRS-1 satellites have been put into orbit for a nominal cost by the Soviets, the Department of Space (DOS) has had to cough up $50 million for every launch of its INSAT-1 series from commercial western launchers.

Even if the Russians keep their word and supply the cryogenic engine, the GSLV will be in time only to put the last of the INSAT-2 series, the INSAT-2E, into orbit in a subsequent launch. The INSAT-2A and INSAT-213 are already booked on the Ariane, and INSAT-2C and INSAT2D are in queue. These satellites are to be launched one every year beginning 1992-93.

Reports say the US pressure on Russia followed a 1989 Washington decision to ban the sale of sophisticated missile testing devices to India for its space programme, following the launch of Agni, the intermediate range ballistic missile. Immediately in the wake of the Agni launch, USA scrapped a $1.2 million deal for a test system that is used to put re-entry vehicles under simulated stress. The CIA and Pentagon had then argued that this technology could facilitate India's efforts to develop intermediate range missiles capable of carrying nuclear warheads.

The cryogenic engine episode cannot be viewed in isolation. It raises questions about the entire range of Indo-Russian cooperation in science and technology.

Meanwhile, the launch will continue to hang on politics.