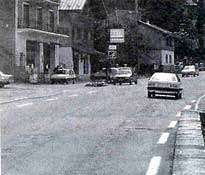 BAD roads make for unsafe driving. Now, researchers at the University of Newcastle upon Tyne in the UK think that they can relieve the problem of worn- out roads by using a longer-lasting surface made of concrete instead of asphalt (New Scientist, Vol 146, No 1980).

Each time a heavy vehicle passes over an asphalt road, the surface tends to deform slightly. The deformation, although small, is permanent and makes the surface uneven, causing it eventually to break up. Though concrete has often been suggested as a workable substitute, it has failed to catch the imagination of scientists because it gives drivers a noisy, bumpy ride. This is because conventional concrete roads are built in sections connected by steel reinforcing rods and the joints between the sections cause vibrations and noise in moving vehicles.

A team-led by John Knapton, professor of structural engineering at Newcastle, has solved the problem by employing steel fibres and a machine called the Laser Screed, which uses laser beams to measure the evenness of a concrete surface and automatically adjusts its hydraulic arms to give the required smooth finish.

Knapton has adapted the machine to produce cambered surface needed for the roads. The machine lays the concrete in a continuous section, thus eliminating joints which produce noise and vibrations. Further, the concrete is reinforced using steel strips, spread in random directions throughout the mix.

To prevent the concrete road from cracking - due to expansion or contraction that temperature changes cause - notches are etched across the surface every few metres. According to Knapton, these grooves are so narrow that they can hardly be felt by people in the moving vehicles. He believes that a concrete road could last up to 40 years without needing repairs, while asphalt roads last for a maximurn-of 20 years and also require at least 3 resurfings during the period.