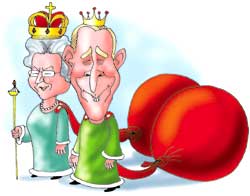 Farm subsidies have never looked more ridiculous. The queen of England and prince Charles, along with some other big landowners in the uk, will soon have to disclose the several million dollars of eu farm subsidies they receive. uk farming minister Larry Whitty announced the move recently, hours after receiving a request from the Guardian Media Group to reveal the details of us $6.4 billion of annual subsidies. The information was sought under the Freedom of Information Act, enforced from January 1, 2005.

The queen and the prince get such large subsidies because of their huge land holdings, which are farmed by tenants. Whitty said a simplified system of payment of subsidies, known as single payments, will begin from April 2005. "I have personally always been uncomfortable that individual payments of subsidy...were not subject to public disclosure...Whilst there may have been some partial justification for non-disclosure...there will be none...in relation to single payment. Not all decisions have yet been reached on this," he added.