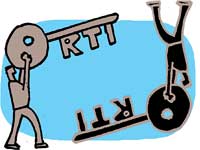 on june 4 this year, President Pratibha Patil called for strengthening the right to information law while addressing Parliament. Four months down the line, the department of personnel and training (dopt) under the ministry of personnel is doing exactly the opposite.

The department coordinates personnel matters for the Union government and wants information officers of ministries and government agencies to have the power to reject applications that are vexatious and frivolous. dopt also seeks to exempt decisions/consultations (read file notings) that take place before arriving at a decision from the purview of Right to Information (rti) act, saying it hampers free flow of thought within the government.The proposed amendments were presented by dopt on October 14 at a meeting with information commissioners from various states.

Nikhil Dey of the non-profit Mazdoor Kisan Shakti Sangathan in Rajasthan said if these proposals get accepted, information officers would start rejecting rti applications at their whims and fancies.

State information commissioner Sailesh Gandhi who attended the dopt meeting said the proposed amendments defeat the very purpose of the act. If an application tries to expose a corrupt officer, it would be termed vexatious. But in a democracy, change depends on vexation, said Gandhi. Similarly queries raised by an applicant would be important to him but would get rejected as frivolous, he said.

As of now, the rti act does not say an applicant has to give reasons for seeking information. An amendment would mean he or she would have to prove the questions in the rti application are neither vexatious nor frivolous.

Gandhi said there is a strong case for not introducing any amendment. The information officers have now begun to understand the act; any amendments will further confuse them and hamper its implementation, the information commissioner said. There were a few other amendments proposed by the dopt like making it easy for non-resident Indians to apply for information. These changes can be effected through notifications and change in rules; amendments are not required, said Gandhi.

Gandhis arguments are backed by two studies. They show that lack of training of government staff is the main constraint in implementing the rti act. One was a government study and the other was conducted by a peoples forum, National Campaign for Peoples Right to Information along with rti Assessment and Analysis Group.

Activists alleged that dopt is trying to introduce amendments without discussion or consultations in spite of past assurances that no changes would be introduced without amendment.

A senior official in the ministry of personnel said the amendments are at a nascent stage and consultations would be held before any amendment is introduced. He said there is no deadline for introducing amendments.