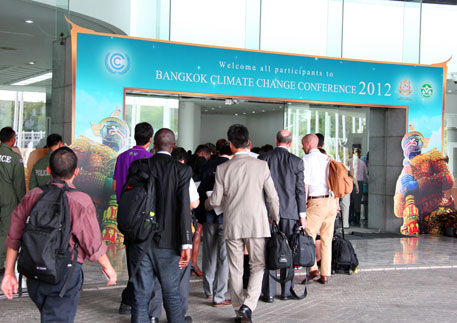 Delegates from more than 180 countries have gathered in Bangkok for informal talks over a range of issues, expected to be concluded at the Conference of Parties (CoP) at Doha in Qatar later this year in November. This being the last pit stop before the Doha round of talks, the chairs of all the three different tracks in session here urged party delegates to make the most of the sunshine in an otherwise cloudy and rainy Bangkok.

Christiana Figueres, secretary of UNFCCC, in her opening statements at a press conference said, “Soon, in Doha, they must show implementation and set the pace towards adopting a new, universal climate agreement by 2015.  The next three years are set to drive the next two decades of the international response to climate change.”

Parties will be negotiating along three different tracks here—one will decide on the commitments that developed countries will make in a second commitment period to the Kyoto Protocol, a second will seek to finalise  views on issues such as finance, technology transfer and the level of effort from parties such as the US that did not ratify the Kyoto Protocol as parties expect closure, and third, the Ad-hoc working group on Long-Term Cooperative Action or ADP track, will decide on the “what and the how” of a work plan for moving towards a post-2020 agreement.

Parties picked up from where they left off in Bonn where the ADP track, negotiating the form and content of a new agreement, ran into all kinds of hurdles; parties could not even agree on who should be elected to the chair until the very last day of the negotiations. At Bangkok, the brief opening plenary sessions were followed by parties delving straight into work by moving into contact groups in both the Ad-hoc Working Group on Kyoto Protocol (AWG-KP) and Ad-hoc Working Group on Long-Term Cooperative Action (AWG-LCA) tracks.

The ADP co-chairs, responding to the urgency to make progress on the ADP that was off to a slow start in Bonn, have proposed to hold round-tables on two different groupings of issues on the agenda. One is “vision” and the other “ambition”. Much anticipation surrounds the progress on this track as parties will discuss who and how should short-term ambition be handled for now up till 2020 by when a new framework, it is hoped, would be in place.

Meena Raman from the Third World Network issued a word of caution as the meeting got under way in Bangkok. “In the name of closing the ambition gap, we cannot have developed country parties jump ship to the ADP.” She referred  to the developments at Bonn where several parties pushed for the LCA track which covers a host of developed country commitments mandated by the Bali Action Plan to be terminated successfully at Doha. How this closure will be achieved and the manner adopted to transfer some of those elements into the ADP will also be key issues discussed in the days to come.