Cut in allocation for rural development comes at a time when most villages are witnessing reverse migration, resulting in 3 per cent dip in rural wage growth 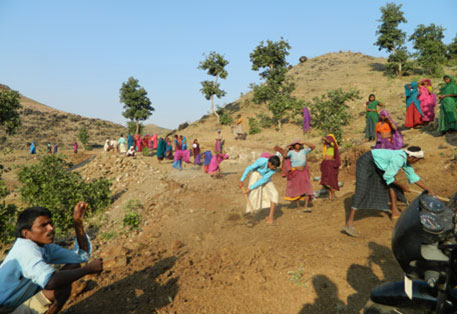 This cut comes at a time when most villages are witnessing reverse migration that has resulted in a three per cent dip in rural wage growth and a huge backlog of unpaid salary under Mahatma Gandhi National Rural Employment Guarantee Scheme (MGNREGS). The budgetary allocation for the employment scheme is Rs 34,700 crore—a marginal Rs 700 crore more than last year’s allocation. And the current unpaid wages under the scheme stands at Rs 4,350 crore.

After meeting this liability, the scheme will be left with just Rs 30,000 crore—which is Rs 4,000 crore less than last year’s allocation. Jaitley announced that he will “endeavour” to raise another Rs 5,000 crore for the scheme, which will not be part of the budget. “Madam Speaker, I hope to garner some additional resources during the year from tax buoyancy.  If I am successful, then over and above the budgetary allocation, I will endeavour to enhance allocations to MGNREGS by Rs 5,000 crore,” he said during the speech.

The Centre’s flagship programme for rural road construction, Pradhan Mantri Gram Sadak yojana (PMGSY), has also seen a cut in allocations. Just Rs 10,100 crore has been allocated for the scheme, which received Rs 14,400 crore in the last budget.

The cut comes despite the fact that the scheme failed to meet last year’s road target because of budgetary shortage.

“Last year, the target was to construct 21,000 km rural roads, but we had funds for only 14,000 km. We were expecting additional funds to meet this year’s target,” said a senior PMGSY official. The budget also reduced allocation for the pension scheme, National Social Assistance Programme (NSAP) to Rs 9,000 crore from last year’s Rs 10,547 crore.

As part of its plan to give autonomy to states, the Centre announced states would design and implement the National Rural Livelihood Mission (NRLM), which supports self-help groups.