Growing construction in the hill station is drying up springs downhill 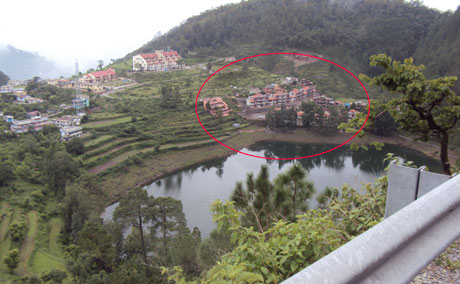 It brought at least some relief to the residents of villages downhill of Khurpatal, a valley near Nainital, when the Uttarakhand High Court ordered the district administration to formulate a water supply scheme for upcoming colonies in the hill station, growing into a bustling town. The scheme should be formulated in such a way that springs in the downhill areas are not affected. Until then, the administration should supply water from a spring flowing through Khurpatal village, the court order in July said.

The court order was in response to a public interest petition filed in 2009 by Ajay Rawat, a history professor with Kumaon University in Nainital. His petition claimed that the Army Welfare Housing Organisation (AWHO) was extracting groundwater from the lake periphery for constructing its housing project. This is affecting the lake and in turn drying up water flow in springs downhill. “Although the court did not directly ban groundwater extraction from the lake area, formulation of a new water scheme will surely save the lake water,” says Rawat.

Residents of at least seven villages downhill the lake are facing water shortage because of the project. They observed the reduction in the flow of water in their springs first in the summer of 2003, a year after AWHO began construction work on its colony of 80-housing units. Though the builders claim to have installed two bore wells, residents of the downhill villages say there could be more. They used to grow vegetables both in the summer and monsoon. But since 2004, the spring flow has become so negligible, especially during peak summer, that most people in the area have abandoned farming and are migrating for contract labour, says Sher Singh of Jagura village. “These springs are the only source of irrigation for us,” says Hari Singh of Patikhet village.

There was no stopping in groundwater extraction despite a district administration order. In 2006, the residents moved the district court of Nainital and approached the Commissioner of Kumaon Division against AWHO.

The court ordered AWHO to halt groundwater extraction from the lake area, while the Kumaon division commissioner asked the Kumaon University and the Jal Sansthan, the water supply agency of the government, to study the impact of boring in the lake area. The report submitted to the state government in June 2006 states that springs in Patikhet, Jagura and Silmoria villages are the extension of Khurpatal lake through underground geological structures. Thus any extraction of groundwater from the lake area affects the water flow in the springs. The report recommended an immediate ban on boring activities in the lake area.

But AWHO continued to extract water from the lake periphery despite the stay orders and recommendations. In fact, it advertised promising its stakeholders to complete the construction of the project by June 2011. So far, AWHO has finished constructing only 40 per cent of the housing project. Following the high court order, the builders have employed labourers to carry water from the spring in the Khurpatal village, which is one kilometre uphill.

Rawat plans to approach the district administration to finalise the water supply scheme as soon as possible. “Once the flats are sold off, the residents may again opt for borewell water,” he cautions.