Over 100 million toilets in five years took a lot of effort; the change is showing now

Call it the result of a strong political will or a multipronged assault on a nagging problem, what India is witnessing now is no less than a civilisational leap forward. Till five years ago, open defecation was a way of life for most in the country. The government was over and again pulled up at international platforms for hosting 60 per cent of the global population that defecates in the open. But at the last count on September 23, villages and cities in all the 37 states and union territories had declared themselves ODF. With verification pending for just 22 per cent of the districts, the country was on track to attain ODF on October 2.

There is a sense of triumph among officials and community leaders who have been part of this sanitation programme, dubbed the largest in the world. Data with the Department of Drinking Water and Sanitation shows in October 2014, when the mission was launched, sanitation coverage in rural areas was just 38.7 per cent. Some 550 million people, or almost half of the country’s population, were defecating in the open.

Since then, a massive 100 million household toilets have been built across 600,000 villages; another 5.8 million household toilets and about 500,000 community and public toilets constructed across 4,303 cities. By the government’s own admission, “SBM has changed the behaviour of hundreds of millions of people with respect to toilet access and usage.” By March this year, notes its press release, 500 million people in rural parts of the country had stopped defecating in the open.

The National Annual Rural Sanitation Survey (NARSS) 2018-19 by the Independent Verification Agency under the World Bank, which has offered financial assistance for SBM-Gramin, reconfirms the claims. The agency, during its survey between November 2018 and February 2019, found that 93.1 per cent of the households had toilets; 96.5 per cent of them were using the toilets.

Such massive toilet coverage has helped the government achieve another milestone much ahead of the target. In 2015, when the United Nations prepared the list of 17 sustainable development goals (SDGs) to be achieved by 2030, one of its foremost agendas required countries to “achieve access to adequate and equitable sanitation and hygiene for all and end open defecation”. Meeting SDG 6.2 then seemed a humongous task for India that topped the list of laggard countries and is often described as an Asian enigma by researchers.

India has a much larger prevalence of open defecation than in other countries with similar economic status, wrote Dean Spears, founding executive director, the Research Institute for Compassionate Economics (r.i.c.e.), in the August 2018 issue of the Journal of Development Economics. Spears says open defecation in such a densely populated country could be the reason many health outcomes are much worse than what would otherwise be predicted based on its GDP per capita.

For instance, India’s infant mortality rate is about one-third higher than those of poorerBang ladesh and Nepal. Anaemia, too, is poorly explained by income and is common in India despite it lacking a high malaria burden similar to sub-Saharan Africa.

Officials say health indicators are fast improving since SBM. “Diarrhoea, a leading cause of death among under-five children in India, accounted for 11 per cent of deaths in 2013,” notes the Economic Survey 2018-19. Its sample analysis shows diarrhoea cases reduced significantly — by 18.4 per cent — in areas where more toilets were installed.

Improvements are evident in malaria, still births and low-birth weight cases, notes the report, which reviews developments in the Indian economy over the past financial year. Citing a World Health Organization report, it says deaths due to unsafe sanitation have also significantly reduced. 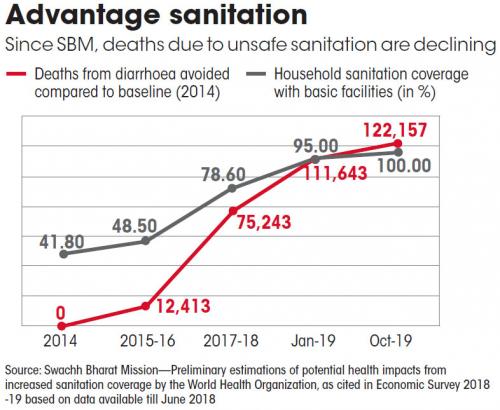 These are no mean feats for a country that has been trying to provide safe sanit ation to all its citizens for over three decades now. However, there was no dramatic shift in the access rates for toilets until SBM was launched, says Economic Survey, adding, “SBM is the first one to emphasise behaviour change as much as, if not more than, const ruction of toilets.”

The December 2015 report of the Comptroller and Auditor General of India shows during the sanitation programmes implemented between 2009-10 and 2011-12, money for information, education and communication (IEC) was spent on unrelated activities like booking meeting halls. By comparison, shows the June 2019 assessment by international policy advisory firm Dalberg, Rs 3,500 crore to Rs 4,000 crore was spent on IEC under SBM-Gramin. This mobilised an equivalent investment worth Rs 22,000 crore to Rs 26,000 crore — almost half of the budget allocated under SBM.

On an average, a person in rural India was exposed to between 2,500 and 3,300 SBM-related messages over the last five years. To initiate behavioural change, 650,000 swachhagrahis were recruited. When new toilets are built and used, says the report, they serve as nudges for people to adopt safe sanitation behaviour.