In the absence of adequate rural treatment plants, a few states rope in underutilised urban facilities 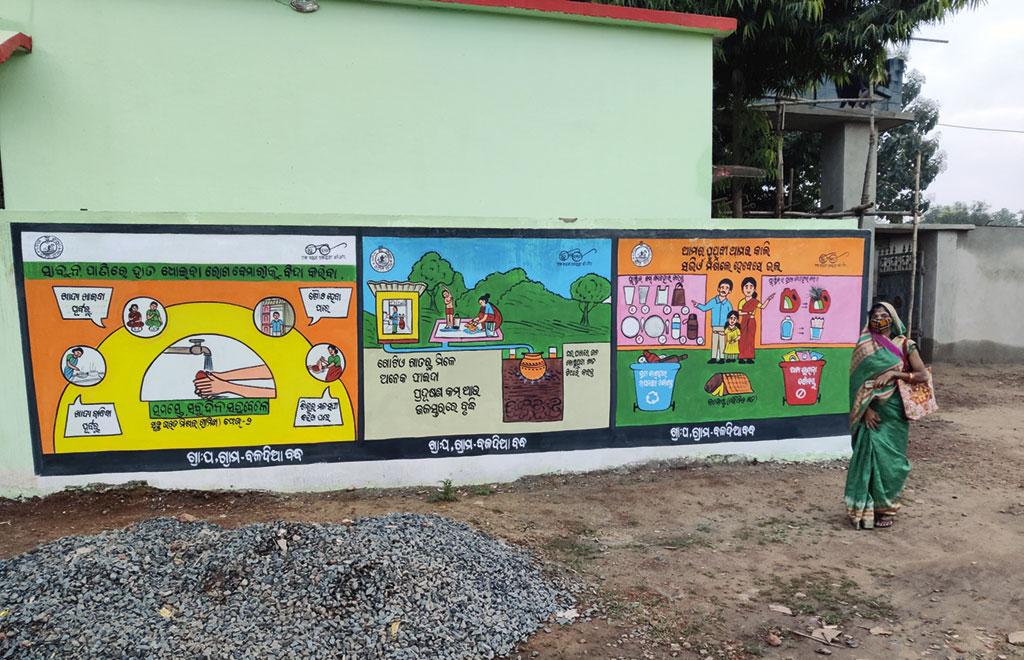 Despite this civilisational leap forward, India's sanitation challenge remains far from over. It is another matter that some people are already slipping back into the habit of open defecation due to dysfunctional toilets or lack of water.

According to the SBM dashboard, almost all of the 160 million households in rural India have toilets. Assuming that every household has five members and that an average human releases 128 grammes of faeces daily — as indicated by the 2015 study in Critical Reviews in Environmental Science and Technology — rural India generates 0.12 million tonnes of faecal matter a day.

In the absence of safe disposal and treatment, such huge volume of waste could create a new sanitation nightmare — a situation similar to when India did not have toilets and exposure to contaminated faecal caused millions of unavoidable deaths.

This is the reason, SBM had laid emphasis on twin-pit toilets built with brick-lined honeycomb design. Such a toilet is like a self-contained treatment plant, where the excreta gets decomposed and can be then safely reused as manure.

Even though the government has over and over again claimed that a majority of toilets built under SBM are honeycombed twin-pits, field investigations by Delhi-based Centre for Science and Environment (CSE) in Karnataka, Odisha, Chhattisgarh and Rajasthan early this year show otherwise.

In 2017, international non-profit WaterAid conducted a rapid assessment of toilets being built under SBM. Though limited to 1,000 households in eight states, it remains the only survey so far to have assessed the design and quality of toilets under SBM. The survey found that in many cases construction was suboptimal, unsuited to the local geography and not adhering to design parameters. A third of the toilets assessed were unsafe, creating immediate health hazards, it stated.

Then there are toilets built prior to SBM when no design specification was issued. Mahesh SC, deputy secretary (development) of Rural Drinking Water and Sanitation Department, Karnataka, told Down To Earth that currently, single pit is the most predominant structure in his state. Similar concerns were also cited by officials in other states like Rajasthan, Sikkim, Haryana, Bihar and Odisha.

Faecal sludge emptied from these faulty or poorly designed toilets is not decomposed and is full of pathogens. More often than not, people simply dump it in waterbodies or in fields.

Though no assessment is available to gauge the untreated faecal sludge that gets dumped in the open, the volume, in all likelihood, is enough to derail the country's progress towards ensuring the United Nations-mandated Sustainable Development Goal-6 to ensure clean water and sanitation for all by 2030.

SBM, now in its second phase, focuses on sustainability of ODF status and solid and liquid waste management. It recommends const-ructing faecal sludge treatment plants (FSTPs) in rural areas for safe disposal of waste coming out of households with faulty toilets. But this is easier said than done.

Unofficial estimates show that the country has so far only five operational rural FSTPs—three in Karnataka and one each in Chhatt-isgarh and Madhya Pradesh.

“Gram Panchayats have a single person called panchayat develop-ment officer who is responsible for overseeing all government projects. So, finding the human resources to construct and manage rural FSTPs is difficult,” said Parameswaran B, director, of Odisha’s Drinking Water and Sanitation department. Arranging land and securing funds for setting up and running FSTPs are also not easy. “Onsite treatment of faecal sludge is the best option,” said Shrikant Navrekar, training director, Nirmal Gram Nirman Kendra, a Nashik based non-profit. But offsite treatment has become an absolute necessity, he added.

To overcome the challenges and to provide immediate access to FSTPs, Karnataka, Odisha and Chhattisgarh have rolled out various convergence strategies, which can work as a model for the country.

Odisha was among the last few states to be declared ODF. But determined to sustain the gains achieved under the first phase of SBM, it is taking proactive steps to manage its faecal sludge. In 2020, the state asked all districts to use the existing FSTPs in urban areas to treat faecal sludge from Gram Panchayats within a 20 kilometre radius.

There are two reasons Odisha opted for the convergence approach. First, most urban FSTPS in the state are currently underutilised. Transporting rural faecal sludge makes these plants economically viable. Odisha has 114 urban local bodies with 118 FSTPs.

Most of them are already operational and the others will be ready in the coming months, said Parameswaran. “While the operational FSTPs are already receiving sludge from nearby rural areas, we have completed the process of tagging Gram Panchayats (GP) to the upcoming ones so that they can start handling rural waste the moment they are operational,” he added.

The model was first launched in Balasore district where 90 Gram Panchayats were tagged to the FSTP unit in Balasore town. By May 2021, the model had been upscaled to include 45 urban FSTPs in the state, said Aroop Tripathy, state consultant on SBM. He adds that the model will successfully cover the entire state in the next year or so.

The advantage of the convergence can clearly be seen in Dhenkanal district, where the lone urban FSTP, set up in 2015 with a capacity to treat 27 kilolitres per day (KLD), is successfully handling faecal waste from 49 Gram Panchayats.

“Earlier, once the toilet pits would get filled, residents would manually take out the untreated sludge and dump it on open fields and dried water bodies. This would often lead to fights among residents,” said Sushant Kumar Jena, Sarpanch of Baldia Bandha village, one of the villages tagged to the Dhenkanal FSTP.

The 40-year-old resident said people would often use kerosene to burn the dried up sludge, settled at the bottom of the pit. Now, the entire process has been streamlined.

Residents who need to get their toilet pits cleaned reach out to the panchayat, which issues a slip and raises a request for a sludge collection truck from the FSTP. On a designated day, the truck arrives, collects the sludge and the slip and submits it to the FSTP. The residents pay the panchayat for the cleaning and they have an option of paying the amount in installments. At the end of each month, the FSTP raises a bill in the name of the panchayat, which transfers the money online.

Self-help groups (SHG) also play a vital role in implementing the model. While urban SHGs operate out of the FSTP and are responsible for managing the requests and the associated coordination, rural SHGs carry out sensitisation drives.

“We have been successfully handling rural faecal waste for the past year and a half,” said Atanu Kr Samanta, executive officer of Dhenkanal municipality that operates the FSTP.

Parameswaran said to avoid any ambiguity in operations, the model allows urban local bodies and GPs to enter into a memorandum of understanding (MoU). They are also free to decide the fees, based on transportation cost and other modalities.

In Dhenkanal, for example, the municipality provides the services and ensures they are carried out safely. It also decides the fees in consultation with GPs and maintains a digital record of complaints. The gram panchayat identifies households with faulty toilets, sensitises them, maintains desludging records and collects the money from them.

A similar model is also being implemented by Chhattisgarh. In Kumhari town of Durg district, the government has set up a 6 kilo litres per day (KLD) FSTP designed to cater to seven GPs along with the urban population, said Girish Mathurey, SBM coordinator of the district. 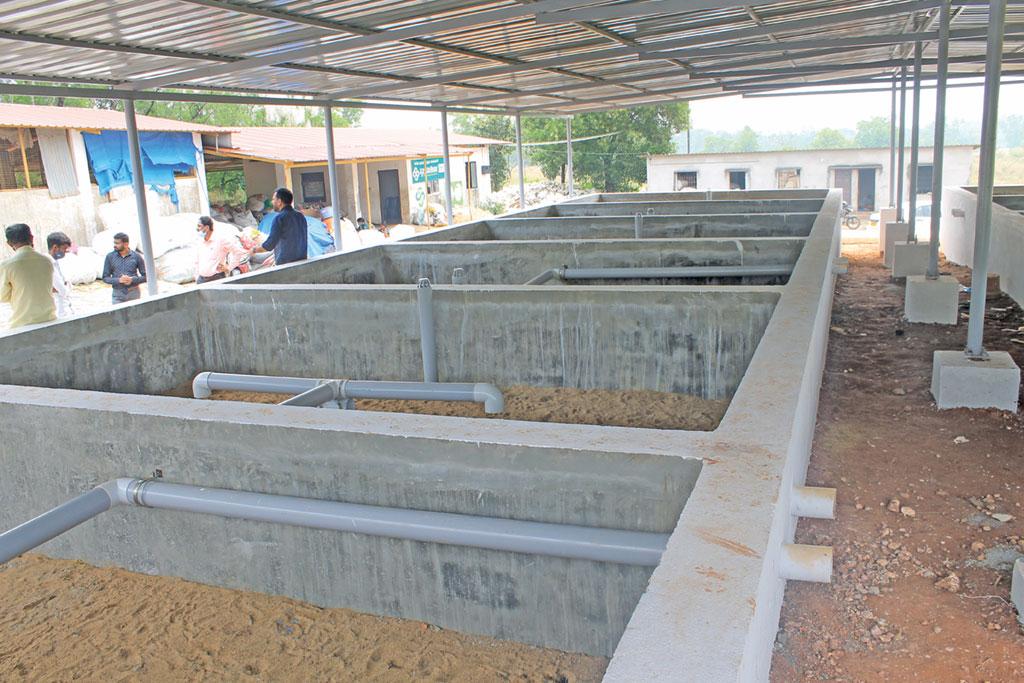 Treatment plants for cluster of villages

In 2020, Karnataka became the first state to come up with solid liquid waste management by-law for rural areas. Under this, the state plans to construct over 100 rural FSTPs that will cater to clusters of GPs. Currently, it has rolled out 16 pilot rural FSTPs. Three of the FSTPs are operational, nine are under construction and land is being acquired for the remaining four.

“The state needs a robust model for safe management of faecal sludge as most rural toilets have single pits,” said Harish, the state’s deputy director of SBM (rural).

The first rural FSTP, set up in 80 Badgabettu gram panchayat in Udupi district, is a 3 KLD plant constructed inside a solid waste recovery facility. It started operations in January 2022 and now caters to six GPs. The plant is being monitored by a joint committee, headed by the executive officer of the Taluka panchayat.

The state is also exploring the option of roping in urban sewage treatment plants for handling faecal sludge in rural areas. Such convergence of STP infrastructure for treatment of faecal sludge is currently being experimented in Raichur and Tumkur districts. The state has recently released a draft MoU document to be signed between municipal councils and GPs.

Karnataka’s plan is that urban STPs will be used to handle faecal sludge from neighbouring villages and multi-gram panchayat FSTPs will be used for villages away from urban areas. “Karnataka is also pushing for retrofitting of toilets to reduce the rural faecal sludge burden,” said Bhanwar Singh Meena, chief executive officer of Madikeri Zilla Panchayath.

Most urban FSTPs are underutilised in the country and as a result, they informally source faecal sludge from rural areas. For example, the FSTP in Lalsot town in Rajasthan’s Alwar district procures faecal sludge from adjacent villages, even though it was constructed for the urban population, said Vinod Kumar Bakolia, plant operator at Lalsot.

“We call the collection trucks who then dumps it in the FSTP,” said Anil Mauer, a 48-year-old resident of Chandsen village, near Lalsot.

The decision by the Odisha, Chhattisgarh and Karnataka governments to formalise such a sharing has brought the much-needed accountability and transparency in the process. A legal framework will also make GPs responsible for ensuring that people regularly desludge their toilet pits. The urban-rural convergence model is also preferred over the multi-gram panchayat model as it does not require new land and funds, and can be rolled out immediately.

Over time, state governments should also move from demand-driven desludging of pits to scheduled desludging. “This will ensure long-term sustainability for the convergence model. For it to be successful, panchayats will need to maintain records of desludging in rural areas as it will help avoid clashes with urban desludging schedules,” said a government official, requesting anonymity.