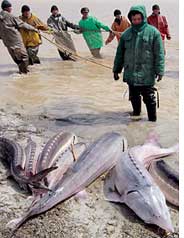 Russia has suggested that Caspian nations impose a five-year ban on fishing for sturgeon, prized for caviar, to save the dwindling stocks from extinction.

"We are ready to renounce sturgeon fishing, even for research purposes," Andrei Krainy, head of the Russian State Fisheries said. The move comes after several international efforts failed to stall sturgeon's extinction in the Caspian Sea. Almost all the world's sturgeon--one of the oldest fish species--live in the Caspian Sea. In the past two decades their population has shrunk by 90 per cent due to pollution, over-fishing and poaching due to growing demand for caviar in the international market. Poaching of sturgeon is now a billion dollar business.

Conservationists have hailed Russia's decision. However, they say a five-year-ban is unlikely to allow sturgeon populations to recover. The sturgeon does not begin to lay eggs until it is 15 years old, and scientists estimate that a ban on fishing would need to last four decades to be effective.