China's industrial units have become death traps, as entrepreneurs on the run for a quick buck pay little heed to their workers' safety 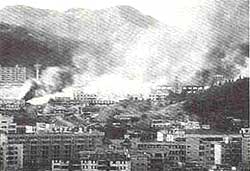 A SERIES of explosions in China's economic boomtown of Shenzhen is the latest proof of the country's dismal industrial safety record. About 70 persons died as the blasts ignited the eight warehouses at a depot owned by Anmao Dangerous Goods Shipping & Storage and the resulting explosions resembled a giant string of firecrackers being set off. Most of the buildings in the compound disintegrated as successive fireballs swept across the area.

The disaster on August 5 put the spotlight on the particularly lax safety record in Guangdong province, where living standards have risen rapidly in recent years. But the business enterprises there place too much emphasis on increasing output, even at the expense of workers' safety, says a Guangdong labour bureau official. Industry-related deaths in the province in the first 11 months of 1992 registered a 62 per cent rise from the previous year, the China Daily reports.

This laxness was confirmed by a local toy factory executive, who said, "Industrial safety is the last thing that anybody worries about in Shenzhen, or anywhere else in the province for that matter."

Yip Yuk-lun, executive director of Hong Kong's Occupational Safety and Health Council, says lack of humanpower is the main problem in enforcing industrial safety standards in township and village enterprises. This problem is likely to worsen because Beijing wants to slash the government payroll by at least 20 per cent.