Salvation for seers, curse for farmers 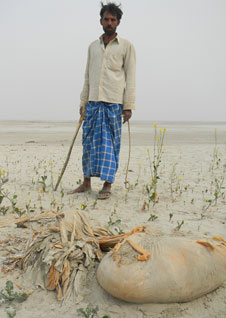 No one in Rasulpur Maryadi, near Bamrauli in Allahabad, dares to visit  the village's melon fields alone. Decomposed bodies, covered in saffron coloured silk, dot the wide expanse of the river bed of Ganga that meanders through the village downstream of Sangam. Quite a few times, children have fallen sick after encountering these bodies.

In holy cities like Prayag (Allahabad), thousands of sadhus die every year and they are given jal samadhi (immersion of the dead in water) in the river. A holy dip in the Ganga during Kumbh or Ardh Kumbh is supposed to help people attain salvation; dying during the period near Sangam, too, is believed grant entry into heaven.

But it is the people in the villages downstream of the river, such as Rasulpur Maryadi, Kasrauli, Neeva and Kandhaipur, who have to deal with the bodies regularly. Nobody, not even the police from Dhoomanganj police station, dare touch the bodies wrapped in saffron.

“When we inform police about a body near the fields, the first thing they ask is the colour of clothes on the body. If they come to know it is wrapped in saffron cloth, they refuse to come and tell us not to go near the body. If there are other clothes on the body, they come and investigate,” said Raj Kumar, a herder in Rasulpur Maryadi. He narrated how a child fell very sick from shock after he trampled on a body stuck on the shore. The sandbank is a preferred spot for birds of prey and dogs that feed on these bodies. People in these villages have to live with the sight and stench of these bodies every day.

Residents are unable to dispose of the bodies for two reasons. An elderly resident of Rasulpur Maryadi, Kishan Pal, said that since the bodies are those of seers who have taken jal samadhi, “we don’t even know whether such bodies should be cremated. Moreover, so many bodies come ashore that it would be very expensive to organise cremation,” he added.

The age-old custom of jal samadhi has its roots in the Hindu myth that Lord Ram died by immersing himself in the Saryu river. Thereafter, it was believed that anyone who ends his life in the river is granted a place in heaven.

So deeply entrenched is this belief about dying at Sangam during Kumbh or Ardh Kumbh that historical records say that people even used to behead themselves at Sangam in the hope of salvation. This practice was banned by Mughal emperor Akbar. Many others used to jump to their death from the akshayvat (never-dying banyan tree) atop a hillock in a fort now under the control of the army, and this practice was banned by the British.

In a year, about 200 bodies come ashore, says Raj Kumar. Residents often seen human carcasses floating down the stream with crows nibbling at them. Officers at Dhoomanganj police station refused to speak about it.

Sadhus want to break the tradition

Influenced by environmental concerns at the Sangam, sadhus now say the tradition of jal samadhi carries no meaning because the rivers hardly have any aquatic life to feed on the corpses. Swami Hari Giri, a mahamandaleshwar of the prominent Juna Akhara, explains that besides environmental concerns, sadhus also feel that sanyasis' vow to work for the welfare of others even after death remains unfulfilled as there are hardly any aquatic animals left in the polluted rivers to feed on their bodies.

This has been the purpose behind jal samadhi for ages, he said. They have demanded adequate land for burial at a meeting convened to look into the grievances of ascetics at the Kumbh Mela ground on January 19, soon after Kumbh started. Samajwadi Party MP Reoti Raman Singh, who works as a government’s representative at the Kumbh, said that he would convey the demand of the sadhus and saints to Chief Minister Akhilesh Yadav.

Giri said, at the Kumbh, five sadhus have so far been given jal samadhi as tradition forbids cremation of holy men and no land is available for bhu  samadhi (cremation). “The concept of jal samadhi had come into being with the idea that the mortal remains of sadhus would be devoured by aquatic beings in keeping with the sanyasis’ vow to work for others welfare, both during life as well as after death,” he said.

The Udasin Panchayati Akhara, one of the 13 akharas of the Hindu sadhus, announced in 2012 that it has given up the tradition of jal samadhi. The sect said the objective was to maintain the purity of the rivers and that jal samadhi increases pollution in the rivers. During the last Kumbh, held in Haridwar in 2010, the All India Akhara Parishad, the apex body of all the saints in the country, passed a resolution that if the administration provided 150 hectare of land to them, they would give up the tradition of jal samadhi and start agni sanskar (cremation) as is the usual practice among the Hindus.

Though the mela administration had agreed to this demand of the ascetic community at that time, the promise by the seers to stop jal samadhi remains unfulfilled. If the administration had implemented the demand of the akharas, there might have been a good beginning from Haridwar during the Kumbh, which might have sent a right message to the sant community in other parts of the country. Appreciating the practice, former Shankaracharya, Swami Satyamitranand Giriji Maharaj, said the ascetic community should change with the changing times. Even in Ardh Kumbh 2007, several saints and sadhus who died during the fair were given jal samadhi in the Ganga with rituals and fanfare.

According to sources, unclaimed dead bodies are also thrown in the rivers at times. On January 16, the body of a man was found stuck in Sohbatiabag nulla. The heavily decomposed body was found with its hands and feet tied.