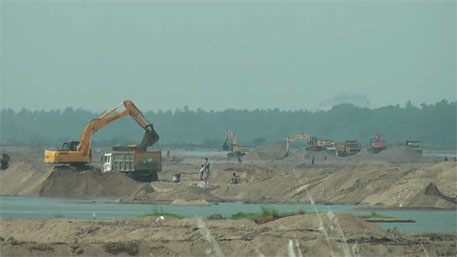 Senior news editor V M Deepa and camera person Prashant Albert, both of prominent Malayalam television channel Asianet News, were attacked by the goons of sand contractors at Kuzhitalai in Karur district of Tamil Nadu on Tuesday. The goons beat up Prashant and threatened to kill him and his driver.

In the past one month, this is the third time that musclemen of sand contractors have assaulted and intimidated mediapersons at Kuzhitalai where large-scale mining in the Cauvery is going on. On May 3, S Chandran, stringer with Tamil television channel Puthiya Thalaimurai, was attacked by the goons. On May 22, this correspondent and the team of Asianet television channel were attacked.

On June 3 evening, Deepa and Prashant were returning from Tiruchirappalli after a shoot for their TV programme, ‘Nalla Mannu’ (Good Earth), an environment and agriculture-based weekly programme. They were on their way to Karur town, about 80 km from Tiruchirappalli, by road. Kuzhitalai is located midway between the two towns.

“When our taxi reached Kuzhitalai, we saw five to six goons on bike waiting for us. Someone may have informed them that we were reaching. Without stopping the vehicle we proceeded towards Karur. But they followed us,” says Deepa. “The driver started driving fast so they got left behind and after a while disappeared from sight. We thought we were safe. But after a few kilometres, a man riding a bike told our driver that one of the tyres of our car was punctured. When he slowed down, another biker came and stopped his vehicle in front of the car and across the road, forcing us to stop. He started accusing us of hitting his vehicle and trying to speed away. It was a ploy to stop us,” says Deepa.

The argument peaked and Prashant and the driver got out of the car to talk to the man. By that time, the goons who were following the vehicle also reached there. “They surrounded the vehicle and started searching for our camera. They insisted that we had captured pictures of sand mining. When they failed to find the camera, they started beating me,” says Prashant. The goons took out a dagger and threatened the driver, who is a local man from Tiruchirappalli. “When I tried to stop them, they threatened me with the dagger before leaving,” he says.

The three have not registered a case with the police. “Last time when mediapersons were attacked, police asked them to leave the state. They were reluctant to register a case. Besides, our driver was so frightened that he just wanted to drop us somewhere and leave as soon as possible,” says Deepa.

Mediapersons in Karur and Tiruchirappalli say it is extremely dangerous for journalists to report on illegal sand mining in Tamil Nadu, specifically Karur. “The Public Works Department of the state government holds the mining leases. But in reality, it is the contractors who handle the sand reaches. They violate all the rules and regulations and court verdicts. They use heavy machinery, mine from more area than allowed and take more than the permitted amount of sand,” says V Charles, chief of bureau of Puthiya Thalaimurai in Thiruchirappalli. Both the All India Anna Dravida Munnetra Kazhakam government led by J Jayalalithaa and Dravida Munnetra Kazhakam government led by M Karunanidhi, the political parties that have been ruling the state, are hand in glove with the contractors, he alleges.

“Sand mining mafia is all powerful and it is useless to file a case against their illegal activities, intimidations and attacks,” says Chandran who was taken away by goons and kept in a closed room for hours when he tried to take pictures of mining activities. “They deleted the pictures from my mobile and video camera and threatened to kill me if I took pictures again. They later dropped me at a place away from the spot,” he says.

Chandran had registered a complaint, but the goons lodged a complaint against him. The police did not take any action and he was finally forced to compromise. “They would not have allowed me to live otherwise. They have money and muscle power,” he says. The mafia tries all ways to silence the media, says Shanu L of Kumudam weekly in Tiruchirappalli, who accompanied Chandran to a police station on May 2 night. “We had to make several phone calls just to get a receipt of the complaint,” he says. “We report on illegal sand mining risking our lives,” he adds.

Since 2001, at least five revenue department officials have been killed by the mafia. In July 2011, revenue inspector P Ramu was run over by a tractor smuggling sand at Thurayur near Tiruchirappalli. Some people who opposed illegal transport of sand faced a similar fate. In March 2012, 21-year-old Satish Kumar was run over by a truck laden with illegally mined sand from Nambiyar river, in Tirynelveli district, when he tried to stop it.

Unless the government and political parties understand the damage indiscriminate sand mining can cause to the environment and check it, the sand mafia with their money and muscle power will rule the roost, say journalists.

Order of the National Green Tribunal regarding illegal quarrying of sand is going on at Puthu Eri, Nayapakkam village, Thiruvallur District, Tamil Nadu, 21/04/2014

Order of the National Green Tribunal regarding illegal extraction of sand in the Coastal Zone, 04/02/2014