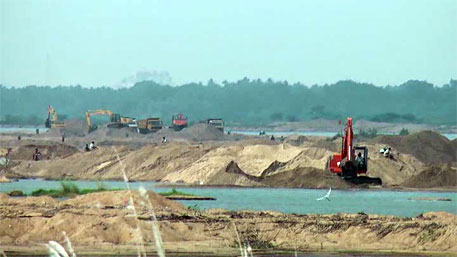 M Suchitra, the Down To Earth (DTE) correspondent in-charge of southern India, and news persons from a Malayalam news channel were attacked and manhandled by goons of mining mafia at Kulitalai in Tamil Nadu's Karur district. They were shooting pictures of river Cauvery where indiscriminate mining of sand is taking place. Suchitra was with V M Deepa, senior news editor of the Malayalam news channel, Asianet, and the channel's camera persons, V B Hiran and P Praveen.

The incident happened on Thursday afternoon when the journalists started taking visuals of the river from a bridge away from the quarries. Around 20 to 30 men reached the site on motorbikes and threatened them, asking them to leave the place immediately. The goons tried to snatch away the cameras, and forced the DTE correspondent to delete the visuals she has taken. T Shanmukam, a local farmer who accompanied the team, was slapped on the face.  Even after the journalists left the spot, the mining mafia chased them for an hour in a Bolero jeep and motorbikes banging the windows of the car in which the team was travelling, not allowing them to even slow down their vehicle.

To escape the thugs, the team took refuge in Mayanur police station on the way to Karur, the district headquarters 40 km from Kulithalai.  Later, they were escorted by two police personnel to the hotel.

Karur district police superintendent, Nirmal Kumar Joshi, asked the journalists to leave the state immediately, citing safety grounds. He said the journalists should have taken proper permission from the district authorities before taking visuals of the river.

The Karur Town Circle Inspector, Cedric Immanuel, told the team that all the police officials were busy with local Mariyamman festival and would not be able to ensure the safety of the journalists.  "If you want to take the visuals of Cauvery, you can find some other locations and get the prior permission of the district collector and the SP," he said.

There are 44 sand mining leases along the Cauvery and its tributary Coleroon in Karur, Tiruchchirapalli and Tanjavur districts, of which 27 are functional now. These quarries cater to about 60 per cent of the requirement of the sand in Tamil Nadu.  All the sand mining clearances are in the name of the state public works department (PWD).

However, local farmers and activists who are engaged in legal battle against the indiscriminate sand mining point out that instead of mining directly, the PWD has engaged in raising contracts, and contractors are flouting all the rules and regulations while plundering the sand from the river.  Mining is taking place 24 hours without any respite.

While the state rules permit to use only two earth moving machines, the miners use 10-15 machines. The miners dig about 15 feet on the riverbed, violating the rules which allow mining only up to three feet. Many farm lands and paddy fields have been converted into stockyards. Each quarry has a shed where 20-25 goons will be on the watch 24 hours.  Around 7,000 to 8,000 truckloads of sand are transported daily from Karur district alone.  A portion of the mined sand is illegally transported to Kerala from where a part is transported to the Gulf countries as dry sand mixed with cement, point out the activists.

In 2013, when Sivasamy tried to take pictures of sand mining, members of the local mining mafia broke his car. “The local police had registered some false cases against me,” he adds.
There are about 18 cases against Cauvery sand mining in the Madurai Bench of Madras High Court. Some complaints are pending before the National Green Tribunal.

Recently, on April 30, the Madurai Bench of the Madras High Court passed an interim order banning  instream mining and mechanised mining in 18 quarries.  However, the Supreme Court has vacated the ban on mechanised mining on May 9. The case will be heard again by the High Court on June 4.

(With inputs from M Suchitra)