The new Indo-Bhutan hydel project on the sankosh river may turn out to be an environmental disaster, feels a green agency 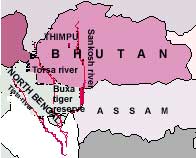 AFTER the passage of almost a decade since its conception, the 4,060-mw Indo-Bhutan Sankosh hydel project finally seems to be taking off. The Water and Power Consultancy Services (WAPCOS), a government of India undertaking, has recently conducted an environment impact assessment of the project and according to S Mukherjee, head, Centre for Environment, wapcos, will submit its report to the Central Water Commission (CWC) within a few days. However, a preliminary investigation conducted by the Wildlife Protection Society of India (WPSI) feel that the project has all the makings of being an environmental disaster.

The project, estimated to cost a whopping sum of approximately Rs 15,000 crore, envisages a 250 m high main dam on the river Sankosh near the Kalikhola area of Bhutan. This dam would be supplemented by a 45 m high lift-dam further downstream, whose basic purpose would be to create a natural gradient for the river and then channelise its water through a 141-km long canal across the northern part of West Bengal into the Tista river. According to the wpsi report, the proposed canal would "spell total doom" to the wildlife of the area. It will start from Kalikhola in Bhutan and then run through the core area of Buxa Tiger Reserve, which includes the Pana, Bhuti, and Bharua Bedi sanctuary blocks. The report states that the canal, which is 60 m wide and six m deep with a bed width of 26 m, will "cut off populations of all wildlife species from one side to another, and will cut off the gene flow and migratory routes of various endangered species, especially, the elephant".

The canal will also cut through the traditional annual migration route of wild elephants of north Bengal from the river Torsa to the river Tista, states the report. The degree of deforestation involved would also be a great deal, causing denudation of 700 ha of prime forest land.

The wapcos report has suggested some 'mitigating measures' to safeguard the environment of the region, one of them being a provision for facilita-ting wide elephant corridors. But officials at wapcos were tight-lipped about any further details regarding the report.

Simultaneously, the cwc has denied that work on the project has already begun in earnest. Says I T Garg, chief engineer, environment, cwc, "No construction activity has begun. Even the project proposals have not been finalised." Interestingly, the Sankosh project is under the aegis of the union ministry of external affairs, which has commissioned the cwc to look into the modalities of the projects. According to sources, the project is politically motivated. "Everybody knows that this project is not viable," said a senior official involved in the project, requesting anonymity. "The environmental devastation that would be caused by it is immense, and no ngo worth its salt will keep silent. Moreover, it is excessively costly. Where is the money to finance such a project?" he asked.

However, other officials stated that the project may well be cleared because of political imperatives that are likely to ignore the environmental aspects. Said one official, "A lot of developmental work in Bhutan has for long been carried out by India, primarily to keep the mountain kingdom an ally because of its strategic geographical status. However, of late, a large number of us-funded projects have begun in Bhutan and India is losing its influence on the nation. The Sankosh project would be a major step ahead in Indo-Bhutan relations in this regard."

Besides, India will also reap the benefits of the project by not only consuming the major part of the power produced, but also by diverting a large volume of the Sankosh river water to the Farakka barrage and, consequently, clean out the siltation of the Calcutta port. According to officials connected with the project, the Kalikhola area, to be totally submerged once the Sankosh dam is built, has a large migrant Nepali population. The officials feel that the Sankosh hydel project would be a justifi-able excuse to have the Nepali population move out of the region.

Denying any such intention, Sonam Rabgye, counsellor at the Bhutan embassy told Down To Earth in a telephonic conversation, "The Royal Bhutan government has always had an excellent record in environmental affairs. I am sure that the Sankosh project will not have any adverse impact on the people of Bhutan." He assured.