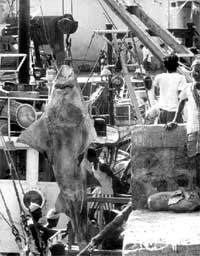 the Union ministry of environment and forests (mef) seems to be getting wiser and waking up to conservation of marine life. In a recent notification, all kind of sharks found in the waters of India have been included as schedule I species. This means hunting or killing of any kind of sharks is banned along the Indian coastline. This notification came after Mike Pandey, a Delhi-based film maker, made a documentary on the killing of whale sharks, an intriguing member of the shark family. According to sources in the MEF, this notification is an extension of the earlier ban on killing of whale sharks (see Down To Earth, Vol 10, No 3, June 30, 2001, p15).

One of the major issues that come forth with such a ban is the livelihood of the fisherfolk. The authorities in the Andaman and Nicobar islands are already objecting to the ban. To overcome such objections, the Union government is planning to introduce ecotourism in the areas where species like whale sharks are spotted. This will involve the local people in conservation activities and simultaneously provide them employment. "We have already taken initiative and asked the Gujarat government to sort out the plans. We are ready to give funds for the same," says SCSharma, additional inspector general of forests (wildlife).