Committee to submit report on the pesticide's toxicity in eight weeks 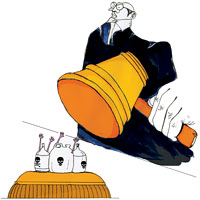 THE Supreme Court has ordered a nationwide ban on manufacture, sale and use of endosulfan for the time being, citing its harmful health effects.

Applying the precautionary principle, the court, in its interim order, said right to life, guaranteed under Article 21 of the Constitution, is the most fundamental of all human rights. The court also directed the statutory authorities to freeze the licences granted to manufacturers of the pesticide till further orders.

The court passed the order on May 13 on a petition filed by Democratic Youth Federation of India (DYFI), seeking a ban on endosulfan. The bench, comprising chief justice S H Kapadia and justices Swatantar Kumar and K S P Radhakrishnan, asked a joint committee to give an interim report within eight weeks on the adverse effects of endosulfan on humans and the environment. The committee appointed by the court is to be headed by the director general of Indian Council of Medical Research (ICMR) and the agricultural commissioner of the agriculture ministry. The court will then decide whether the ban should be extended or lifted.

In December 2010 the National Human Rights Commission asked ICMR to conduct a nationwide study on the impact of endosulfan. ICMR has set a July deadline for deciding the protocol for the study. Following this the study will begin in Punjab, Haryana, Uttar Pradesh, Bihar and Karnataka. A week after the ban, V M Katoch, director general of ICMR, said the council is going ahead with the independent study as he has not received any directive from the court on the joint committee or the eight-week period for the study. “It is going to be difficult for a scientific study to be completed within eight weeks,” said Katoch. The agriculture ministry refused to comment.

The court would have passed the order on May 11 but for the pesticide manufacturers who wanted to present some documents before the court. The hearing was then postponed to May 13. Deepak Prakash, advocate for DYFI, says it was a smooth sail for the petitioners as the bench prima facie supported the ban. The Union government, represented by solicitor general Gopal Subramaniam, agreed with the need of a blanket ban but suggested waiting for the ICMR report. But Kapadia retorted, “I cannot allow the use of endosulfan for even seven weeks. Effect on one child’s health is also crucial.”

DYFI had supported its petition with three reports—a 2002 health report by the National Institute of Occupational Health (NIOH), a 2003 Kerala government report on health hazards of aerial spraying of the pesticide, and a 2011 report of Government Medical College in Calicut, Kerala. All the three studies indicted endosulfan.

During the hearing the solicitor general raised concern over the impact of an immediate ban on kharif crops, especially paddy and cotton. The bench asked for alternatives but the government said it had no information on them but knew that endosulfan was cost-effective. The bench countered by saying money could not be the only yardstick to decide this matter. The manufacturers took refuge in the 2003Agriculture, Bihar, Endosulfan, Haryana, Health Effects, India, Indian Council Of Medical Research (ICMR), Karnataka, Kasaragod (D), Kerala, Pesticide Industry, Pesticide Use, Pesticides And Toxins, Punjab, Supreme Court, Uttar Pradesh, right to life, Article 21, National Human Rights Commission, National Institute of Occupational Health (NIOH),  O P Dubey committee report that was mandated to look into Kerala’s endosulfan tragedy and the findings of the NIOH report. The committee had taken state agricultural universities’ data and concluded there were no health impacts of endosulfan except in Kasaragod where endosulfan was aerially sprayed. Kapadia chided the manufacturers for lacking corporate social responsibility and ignoring impacts on human health.

The judgement restores our faith in the judiciary, says C Jayakumar of Thanal, a non-profit working with endosulfan victims in Kerala. “The issue was ignored by agricultural scientists who were sold out to corporate interests,” adds Jayakumar.

But it is going to be tough keeping tabs on the implementation of the ban. Debjeet Sarangi of Living Farms, a non-profit in Odisha, says he is coordinating with the organisation’s field workers to ensure that no endosulfan is sold in the state.

States will now have to revoke the permits of endosulfan manufacturers. Of the three main endosulfan manufacturers in India, Excel Crop Care and Coromandel International Limited have units in Gujarat, while the third, Hindustan Insecticides Limited, has a unit in Kerala. “It is worth watching what the states will do. If they do not follow the order they will be in contempt of the court,” warns Jayakumar.