THE Supreme Court has turned down the request of pesticide manufacturers to allow them to export the pesticide stocks in India. The court had banned the sale, manufacture, use and export of the pesticide on May 13 on a petition by the youth wing of the CPI(M), the Democratic Youth Federation of India. While ordering the interim ban, the court had appointed a joint committee to report on the health and environmental impacts of endosulfan. The committee, headed by the director general of the Indian Council for Medical Research (ICMR), missed the July 15 deadline for submitting the report. 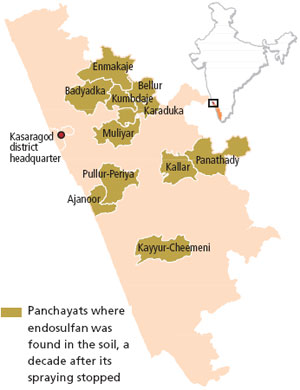 This gave the Pesticide Manufacturers and Formulators Association of India (PMFAI), a respondent in the case, the opportunity to appeal for immediate relief. In an affidavit filed in the court, PMFAI claimed the health problems in Kasaragod district in Kerala, which triggered the demand for a nation-wide ban on the pesticide, were not because of endosulfan, but because of inbreeding in the area’s population, iodine deficiency and radiation. But the court turned down the plea.

PMFAI’s claims were termed “ridiculous” by Mohammed Asheel, assistant nodal officer of Kerala’s endosulfan rehabilitation project. As for inbreeding, an analysis of the study conducted by the Department of Community Medicine of Calicut Medical College shows that marriage among relations is not a common practice in the affected area, says a member of the joint committee who did not want to be named.

An ICMR funded project sheds light on some of the effects of endosulfan. The details of the study, by a team from Kasturba Medical College in Manipal, was obtained through Right To Information (RTI) by C Nithyananda Pai, convener of non-profit Consumer Welfare Forum based in Karnataka. The RTI reply shows the study concluded that reproductive hormones, like follicle stimulating hormones and testosterone, were significantly reduced in men exposed to endosulfan. The study also revealed higher amount of genetic damage in people exposed to endosulfan as compared to those unexposed to the pesticide. Health activists say this makes people in the area prone to diseases and they pass on the genetic defects to their children. ICMR did not make this study public though it was completed in 2006. V M Katoch, director general of ICMR, says he is not aware of such a report but that he would look into it.

Another report published by the Kerala State Council for Science, Technology and Environment (KSCSTE) concludes that endosulfan is present in the soil and sediment samples even 10 years after its aerial spraying was halted in Kasaragod’s cashew plantations.

“Endosulfan is persistent in acidic conditions; the laterite soil, temperature and humidity conditions in Kasaragod make the soil acidic. It is a possibility that the pesticide may have entered the food chain,” warns C T S Nair, former executive vice-president of KSCSTE.