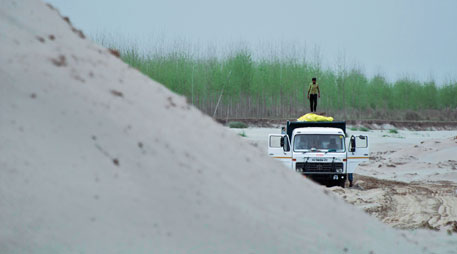 The Supreme Court has issued notices to Centre and all the states on Friday on a public interest petition that seeks framing of rules to prevent illegal sand mining in river beds. The petition was filed  by Delhi based lawyer, Indra Sawhney on behalf of the National Legal Services Authority (NALSA), which has extensively quoted reports published by Down To Earth (DTE)  on rampant sand mining devastating several water resources.

The petition was admitted by the bench headed by Justice S S Nijjar after the counsel pleaded that the court needs to intervene in the matter as indiscriminate sand mining has endangered the life-sustaining capacity of the natural environment. Sawhney stated in the petition that there is no uniform framework to regulate mining of sand. “Guidelines have to be evolved for sustainable mining as mining of sand has increased over the years and there is significant adverse impact on the ecology and bio-diversity,” she stated.

Calling for strict prohibitory orders, Sawhney has highlighted through various media reports, including DTE's coverage on the sand mining, that rivers have been plundered by the sand mafia. "The rivers are being plundered by a powerful mafia controlling the sand mining business. The illegal trade is driven by the unholy nexus between contractors, politicians, trade union leaders, panchayat, revenue officials and corrupt policemen," the petition said. Involvement of the state machinery in many areas in the sand extraction industry has often caused hardships to the people affected by sand mining.

Talking to DTE, Sawhney said that unlike coal or granite, there is no policy for river sand. Rampant mining of river has resulted in the loss of fertile lands, erosion of river channel banks and uncontrolled flooding of the fields in many areas during the monsoon, leading to crop losses.

Figures released by the Union mines ministry in 2012 show that sand contributes only 9.4 per cent to the total minor minerals mined in the country valued at Rs 18,734 crore. In 2009 and 2010, India ranked 12th in sand and gravel production. Andhra Pradesh (39 per cent), Gujarat (17 per cent), Rajasthan (14 per cent), Maharashtra (13 per cent) and Uttar Pradesh (7 per cent) are the leading producers of sand.