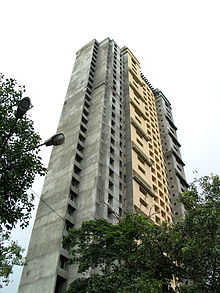 The Supreme Court of India has stayed its own order by which it had transferred all environmental cases from high courts in the country to the National Green Tribunal (NGT) in August 2012 . The recent order, dated March 10, was given on a petition filed by the Adarsh Cooperative Housing Society, which has built the controversial 31 storey Adarsh residential building in south Mumbai on land meant for war widows.

The Union Ministry of Environment and Forests (MoEF) had ordered the demolition of the housing society in January 2011, citing violations of the Coastal Regulation Zone Notification of 1991. Adarsh housing society filed an appeal against this order in the high court of Mumbai. In January 2013, the company filed an appeal to the high court, requesting transfer of the still pending case to NGT, citing the August 2012 order of the Supreme Court. In July last year, the high court rejected the appeal, following which the company approached the apex court, challenging the high court order against transfer of the case to NGT.

The apex court has upheld the high court order for now and has added that the order transferring cases needs reconsideration. The Supreme Court order also states that till the matter is decided, no case will be transferred to NGT. The next hearing is on April 21.

The August 2012 order of the apex court was given in a case connected with the Bhopal gas tragedy. The idea behind the order was to avoid “likelihood of conflicts of orders between high courts and NGT” with a view to expedite the process of providing justice. All matters that fell under the purview of the NGT Act, 2010, Schedule I, were to be transferred. Interestingly, justice Swatanter Kumar, the present chairperson of NGT, was on the bench that passed the August 2012 order.

Schedule I mentions seven environment and forest laws in the country, such as the Water (Prevention and Control of Pollution) Act 1974, Forest (Conservation) Act 1980, Environment (Protection) Act 1986, and Air (Prevention and Control of Pollution) Act 1981. Thus any matter related to these Acts form part of the NGT jurisdiction. Keeping these principles in mind and taking into consideration the Supreme Court order of August 2012, the Adarsh case relating to violation of CRZ Notification does seem to fall under the purview of NGT.

What about environment+ cases?

Lately, there have been some tensions over jurisdiction of high courts vis-à-vis NGT. For instance, in January this year the Chennai High Court passed an order stating that the Southern bench of NGT has no authority to take up sou moto cases as it is not a part of the NGT Act.

The cases transferred from high courts to NGT for which the rulings have been given revolve around a number of environmental issues. There have been cases of NGT sending the cases back to the high courts, saying they are out of the purview of NGT. A case in point is one relating to the Great Indian Bustard Sanctuary. NGT in its judgement dated March 25 has sent the case back to high court, stating the Wildlife Protection Act does not fall under Schedule I and is hence out of its jurisdiction.

NGT was formed with a clear aim to expedite environmental cases in a special court. Is that purpose being met? Most would say yes. Article 226 of the Indian Constitution lays down the jurisdiction of the high courts in the country. The August 2012 order of the apex court was an attempt to ensure there is no overlap of jurisdiction of high courts and NGT. However, to keep the NGT jurisdiction restricted to matters related to the seven Acts in Schedule I of the NGT Act might not serve the very purpose of having NGT. For many environmental cases might not fall under the purview of only those Acts or might involve more regulations not mentioned in Schedule I.

It is imperative that the substantial question related to environment is considered to include a wider meaning of the phrase. Then only the intent of the law (NGT Act) will be met.