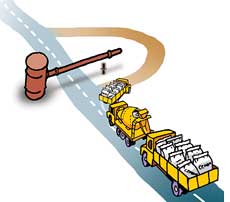 The court had stayed mining in the area in February after local residents moved court saying Lafarge obtained mining licence through fraud and without the mandatory environmental impact assessment (eia).

Attorney general G E Vahanvati argued that continuing the stay might sever India’s friendly ties with Bangladesh; the limestone quarried in Meghalaya feeds Lafarge’s cement factory in Sunamganj district of Bangladesh. The company started mining in the region in 2006 by allegedly obtaining a false certificate that showed the area was wasteland (see box).

“If this court has not allowed anyone to mine without eia, why should we make an exception for it (Lafarge)?” asked the bench comprising chief justice of India K G Balakrishnan, S H Kapadia and Aftab Alam.

During the hearing Vahanvati submitted a draft proposal saying mining could be allowed by imposing conditions on Lafarge to fund tribal welfare schemes within a 50-km radius of the project. For implementing community development schemes, Vahanvati proposed a special purpose vehicle (spv) on the lines of the one set up by Vedanta subsidiary, Sterlite Industries, in Orissa for mining Niyamgiri hills.

Vahanvati said the spv, with equal participation from Lafarge and state government, could be made responsible for administering a community development fund and that Lafarge would pay Rs 10 crore into this fund every year. He said the company could be asked to pay Rs 50 crore for diverting forest land for mining.

The court posted the case for April 9 and asked the attorney general to prepare the modalities for eia by then and also specify the conditions that could be imposed on Lafarge. Fali S Nariman who appeared for Lafarge said the conditions were acceptable to the company.

The petitioners, Shella Action Committee, said the court order on conducting an eia amounts to giving an escape route to Lafarge. They said the company should be punished instead and the mining project should be cancelled. “To me this seems like the actual Sterlite model—violate all laws and get them regularized,” said R Shreedhar, geologist with the non-profit, Environics Trust of Delhi.

The Sterlite model refers to the apex court’s order in August 2008, allowing bauxite mining project in Orissa’s Kalahandi district subject to a rehabilitation package for the tribals. Shreedhar said the Sterlite model goes against the Constitution of India which does not provide for giving money in exchange of violations.