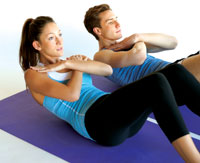 EXERCISING HAS various physical and mental health benefits. It is known to help in relieving stress-induced depression. But till now mechanisms behind this were not known. A study on mice has shown that physical activity causes changes in skeletal muscles that help it block kynurenine-a substance that accumulates in the blood during stress and in high amounts can cause depression-from entering the brain. Physical exercise increases protein PGC-1α1 in skeletal muscles. The study found that mice with high levels of PGC-1α1 also had a high level of an enzyme called KAT. This enzyme converted kynurenine into kynurenic acid, which is not able to pass from the blood to the brain, protecting the brain from stress. Cell, September 25 (online)

A SUBSTANTIAL amount of water found in the solar system predates the Sun. The conditions under which water is formed can be ascertained by comparing the ratio of different hydrogen isotopes in water. It is already known that interstellar water-ice has a high ratio of deuterium (an isotope of hydrogen) to hydrogen because of the very low temperatures at which it forms. Using this data and simulation models a study has established that a large amount of water in the solar system originated from ice that took form in intersteller space. Similar ice, having prebiotic organic matter, could be present around other stars. Science, September 25

changesIN ocean temperatures have been attributed to global warming, but local winds canexplain them better. Wind speed impacts ocean temperatures by changing the rate of evaporation. Faster wind means more evaporation and cooling. Between 1900 and 2012, changes in temperatures in Pacific Ocean waters off North America followed changes in wind directions and velocity. Ocean temperature in the region saw a steep rise between 1920 and 1940, though the increase in greenhouse gases during the period were negligible. PNAS, September 22