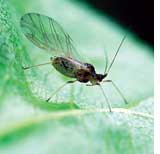 One of uk's most damaging aphids--the peach-potato aphid--has been found to be flying two weeks earlier for every 1C rise in mean temperature. This year, the first aphid was caught on April 25, almost four weeks ahead of the 42-year average, reveal scientists of the Rothamsted Research, uk. Through the study the researchers found that populations could grow both in winter and spring, provided the conditions were warm enough. After a warm winter, large numbers were seen flying, affecting crops in spring and summer when they are most vulnerable. Aphids extract large amounts of sap weakening the plant and spread viruses.

A warming Indian Ocean has been linked to less rainfall in eastern and southern Africa with implications for the region's food security, says a study co-funded by nasa. Rainfall in eastern Africa during the rainy season, from March to May, has declined about 15 per cent since the 1980s. This decrease which occurs every 20-25 years, is likely to continue. Researchers studied seasonal rainfall data over the Indian Ocean and the eastern seaboard of Africa from 1950 to 2005 and found that decline in rainfall on land was linked to increase in rainfall over the ocean. They say the combination of evidence from models and data suggest that human-caused warming of the Indian Ocean led to an increase of rainfall over the ocean, which in turn added energy to the atmosphere. The added energy created a weather pattern that reduced the flow of moisture onshore and brought dry air down over the African continent, reducing rainfall.

Persistent free radicals (pfrs), a newly discovered air pollutant, could be as harmful as cigarette smoke, say researchers of Louisiana University in Baton Rouge. These atoms, molecules, and fragments of molecules are highly reactive and damage cells. This could help explain why non-smokers develop tobacco-related diseases like lung cancer. Free radicals are formed during the burning of fuels or in photochemical processes like those that form ozone. Most of the previously identified atmospheric free radicals form gases, exist for less than a second. In contrast, pfrs form on airborne nanoparticles and other fine particle residues as gases cool in smokestacks, automotive exhaust pipes and household chimneys. These can linger in air and travel distances. Smokers get a double dose of pfrs every time they light up since tobacco smoke also contains these molecules.

Pesky computer viruses could soon have it a little tough. University of Michigan researchers have developed a method called CloudAV which moves anti-virus operations from individual computers to the virtual world. CloudAV is accessible to any computer or mobile device on a network that runs a simple software agent. Each time a computer or device receives a new document or programme, that item is automatically detected and sent to an antivirus cloud for analysis. The CloudAV system uses 12 different detectors that act together to tell the inquiring computer whether the item is safe to open. Personal computers can generally use only one anti-virus detector at a time due to performance constraints and programme incompatibilities.

A road in the small Dutch town of Hengelo is to be paved with air-purifying concrete in a trial that could lead to a breakthrough in the fight against pollution. Experts from the University of Twente developed and tested the concrete paving stones which contain a titanium dioxide-based additive. In laboratory conditions, the additive--under the influence of sunlight--binds the NOx particles emitted by car exhausts and turns them into harmless nitrates. 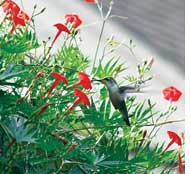 Plants that team with specific pollinators--hummingbirds or bees--evolve to heighten their appeal, according to a student at Duke University in Durham North Carolina. This goes against the theory that plants get stuck with their look once they become associated with a particular pollinator. The study suggests that plants have more evolutionary flexibility than previously thought. Pollination mechanisms in 115 species of Ruellia was studied. There was little evidence to suggest that Ruellia species pollinated by hawkmoths or bats have ever reverted to the more general strategy of catering to bees or other insects. But there appeared to be between 8 and 11 transitions from hummingbirds in favour of insects.

As the Arctic Ocean warms this century, shellfish, snails and other animals from the Pacific Ocean will resume the links with their north Atlantic cousins, severed by cooling conditions three million years ago, predict researchers of the University of California, Davis and the California Academy of Sciences. Climate models predict a nearly ice-free Arctic Ocean by 2050. That will restore conditions that existed around 3-3.5 million years ago. Fossil records show that several north Pacific species have relatives in the north Atlantic.