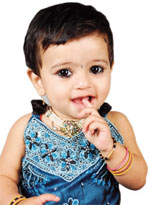 Parents need to pay extra attention to the oral health of their toothless tots.

A study confirms the presence of bacteria, which cause tooth decay, in the soft tissue of the toothless infants’ mouths. Using a high-throughput molecular technique, which allowed the researchers to quickly conduct millions of chemical tests, they were able to characterise an entire community of oral microscopic organisms in the infants.

Cavities are a result of many bacteria in a community, not one pathogen. The bacteria in the infants were much more diverse than expected, say researchers. Parents should wipe their infants’ gums with damp washcloth twice a day, the team suggests. PLoS ONE, August 10

ASTROPHYSICS
All ears to sunspots

By listening to the sounds of the sun, scientists will be able to give a two-day warning before a sunspot appears. Sunspots develop in active solar regions of strong magnetic fields and appear dark when they reach the sun’s surface. They give rise to solar flares, which in turn give rise to solar storms 48 hours later.

Solar storms disrupt communication systems. Scientists have developed a method that allows them to peer deep into the sun’s interior (about 60,000 km) using acoustic waves. It is similar to an approach used to measure seismic waves. The researchers measure the travel time of acoustic waves between widely separated points on the solar surface. Science, August 19

At last, scientists have discovered a mechanism that explains how stress damages DNA. Researchers say when people experience stress, they release adrenaline—a fight or flight chemical—that damages genes, resulting in aging looks and higher risk of diseases like cancer.

They gave lab mice an adrenaline-like compound. It activated a receptor, which triggers biological pathways that lower production of a protein called P53. The protein is known to prevent genomic abnormalities and tumor formation. Nature, August 21 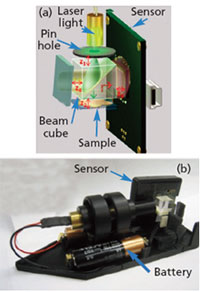 TECHNOLOGY
Microscope on the go

Researchers have built a palm-sized, low-cost microscope that uses hologram technology instead of lenses. The microscope costs less than US $100, as it requires off- the-shelf electronics like laser pointer and sensor chip.

The microscope employs a hologram technology: it divides a laser light into two beams. One beam is directed to the sample being imaged, where it either passes through or deflects off the cells or the particles. The other beam, which acts as a reference, does not. The pattern created by the two beams is recorded by sensor chip.

Computer software is then used to analyse the pattern and reconstruct the image. Researchers say the microscope could be used for field investigation of contaminants like E.coli bacteria in water or pathogens in blood. Biomedical Optics Express, August 30

Stitching ruptured blood vessels could soon be history. Scientists have developed a gel and bioadhesive combo to join vessels. Sutures are difficult to use on vessels less than 1mm wide. When the combo is used, the gel helps distend both openings of a severed vessel, allowing researchers to glue them together. The gel becomes solid and elastic after heating but melts into the bloodstream when cooled. Nature Medicine, August 28 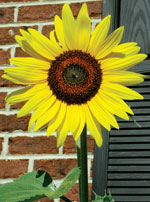 The eastern US was the first home of modern sunflowers. Reseachers examined the geographic diversity of three recently identified domestication-related genes of sunflower. They found that eastern US was an independent centre of the domestication. They discovered no evidence to support earlier suggestions that a second domestication event had occurred in Mexico by 2600 BC.

Controversy over the domestication began when sunflower seeds were found at pre-Columbian archaeological sites. It was proposed that, along with domestication in North America, a sunflower domestication occurred in Mexico. Alternatively it was suggested that sunflower may have been dispersed from North America to Mexico through trade routes. PNAS, August 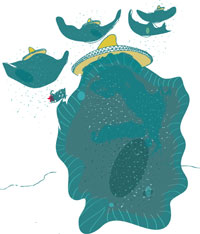 Using computer models, scientists have investigated how widely microbes could be spread by wind. They released virtual microbes from both the southern tip of South America and Mexico. Once airborne, microbes of 0.02 micrometre in diameter and below could travel thousands of kilometres in a year.

Microbes less than 0.009 micrometre, including amoeba, went as far as Australia. Previous outbreaks of meningitis in Africa have been linked to airborne viruses, although the researchers noted most microbes that are transported by wind are harmless. Journal of Biogeography, August

Some 400 billion radioactive sulphur particles were released into the air per square metre of the cooling pool at the Fukushima nuclear plant in Japan. Atmospheric chemists have reported the first quantitative estimate of how much radiation leaked from the reactor from March 13 to 20 following the 9.0 earthquake and tsunami on March 11.

The spike occurred when operators of the overheated reactors started cooling them with seawater. The radioactive sulphur was produced by partially melted nuclear fuel in the reactors. PNAS online, August

A nightcap can deprive one of a goodnight’s sleep. Researchers say alcohol in the bloodstream disrupts sleep. They gave volunteers alcoholic drinks of varying strengths (0g, 0.5g and 1g) 100 minutes before bed. They studied their heart rate and nervous systems while they slept. Normally while sleeping, the part of the nervous system responsible for “rest-and-digest” activities dominates. The alcohol suppressed this activity and increased the heart rate. Drinking leads to insomnia, not a good sleep, says scientists. Alcoholism: Clinical and Experimental Research (to be published in November 2011). 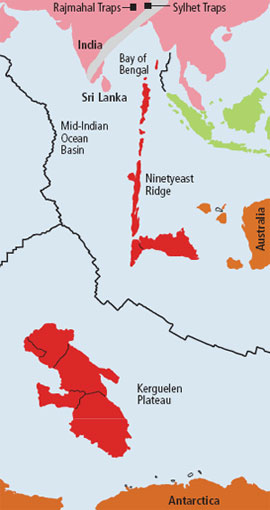 They might be thousands of kilometres apart but their origin binds them together. They are: Sylhet Traps lava flows of the Shillong Plateau, the Rajmahal Traps lava flows moving towards the Bay of Bengal, the Ninetyeast Ridge near the Indian Ocean, the edge of western Australia and the underwater Kerguelen Plateau near Antarctica. The chemical and isotopic signatures of lava rock samples of these five places show they came from the same lava plume that broke the Gondwana supercontinent, says a research by University of Rochester. Formed 500 million years ago, the Gondwana consisted of landmasses of Antarctica, South America, Africa, Madagascar, Australia, the Arabian Peninsula and the Indian subcontinent. Earth and Planetary Science Letters, August