Technology
Mr Gum gets it right too

A popular rapid oral test for detecting HIV is as accurate as traditional blood tests, according to a Canadian research. Although previous studies have shown that OraQuick HIV 1/2 has great promise, this is the first study to evaluate its potential at a global level.

The test, which yields results in 20 minutes and costs $35, examines a fluid called oral mucosal transudate secreted from the blood vessels on the gum. Unlike saliva, this fluid has all the components of blood. Users swab the cotton-tipped stick around their outer gums and place it into a vial filled with an enzyme solution.

A reddish line appears on the stick if HIV antibodies are found. The user then takes the test to a doctor to confirm the result.
The Lancet Infectious Diseases, January 24 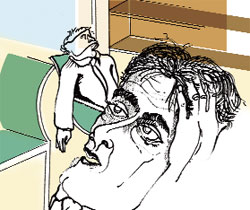 Indoor office air could harm workers’ health by exposing them to compounds that can cause thyroid hormone imbalance and infertility. Researchers say exposure to polyfluorinated compounds (PFCs), released by furniture glues and paint, through air leads to PFCs levels in blood of workers.

It is hailed as the world’s thinnest and strongest material, and finds its use in everything from cell phones to aircraft. Now scientists are raising a toast to graphene for its potential to distill vodka. Researchers in the UK have created films from graphene oxide which they say are impermeable to all gases and liquids, except water.

To test its efficacy, the researchers sealed a water container using the film. It could prevent air or any other gas to leak out, but was no obstacle to water molecules.

The molecules evaporated at the same speed, whether the container was sealed or open. They did the same with a vodka bottle and found the distilled solution became stronger with time, says the team. Science, January 27 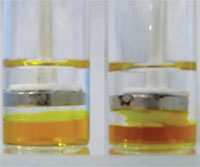 Scientists have developed a soap that responds to magnets. The soap could replace harmful dispersants to clean up oil spills.

To produce it, the team dissolved iron into surfactant materials (compounds that enable liquids to mix with substances they repel) made of chloride and bromide ions. This created metallic centres within the soap particles that react to magnetic field.

By controlling the soap using a magnet, it will be easy to remove oil from water while collecting the surfactants. Dispersants require an additional electrical charge or an alteration in pH to be effective. These processes affect the environment or are expensive.
Angewandte Chemie, January 20 (online)

Grafted stocks of melons take in large quantities of pesticides which are passed into the fruit. Farmers graft melons onto the roots of gourd plants because it makes the fruit more disease-resistant. In a study, Turkish researchers grew watermelon-squash graft seedlings. They tested the roots, stems, leaves and fruit of the plants and found that organochlorine pesticide levels were 140 times higher in squash-grafted watermelons than in non-grafted watermelons.

Grafting watermelon onto squash rootstock increases contaminant uptake into the shoot system, explain the researchers. Organochlorines have been banned because of their effect on humans but they remain in use.
Journal of Agricultural and Food Chemistry, January 25

Soil sciences
Lead out by fungus

Fungi can convert toxic pollutant lead into its most stable mineral form, pyromorphite. Remediation strategies for lead-contaminated soil focus on converting it to pyromorphite. In a study, scientists examined lead shot (ammunition used in shotguns) after it had been incubated with and without fungi. In the presence of fungi, the shot starting forming pyromorphite after 30 days. Less stable forms were noticed on the shot incubated without fungi. Used in firearms and paints, lead can cause behaviour disorders in children. Current Biology, January 12

Palaeontologists have unearthed the oldest known dinosaur nesting site, dating back 190 million years, in South Africa. The site includes multiple dinosaur nests, eggs and remains of adults of genus Massospondylus. The distribution of the nests indicates the dinosaurs kept returning to these sites and assembled in groups to lay eggs. Massospondylus is a relative of the giant, long-necked sauropods of the Jurassic and Cretaceous periods. PNAS, January 23 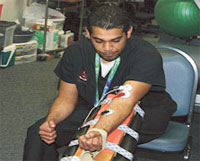 Remember that painful muscle soreness post workout? It is called delayed onset muscle soreness. Treating the condition is tricky as it is quantified using a visual analog scale, a subjective measure of whether a muscle is sore. 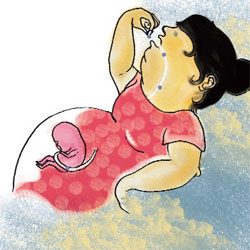 Women who take anti-depressants during pregnancy are twice at risk of giving birth to children with high blood pressure in the lungs, says a study. It reviewed six million births that took place from 1996 to 2007 in Denmark, Finland, Iceland, Norway and Sweden. BMJ, January 12

Marine sciences
Where the worms are…

About 20,000 people annually get infected by nematodes of the genus Anisakis. If ingested, the worm, found in marine hosts including whales, leads to severe stomach pain and allergic reaction. Scientists have gathered data on its distribution in the ocean. The findings indicate that two Anisakis species are concentrated in specific areas within climate zones. The finding is vital because infections are no longer restricted to the one region where consumption of raw or insufficiently cooked fish is traditional, say the researchers. PLoS ONE, December 13 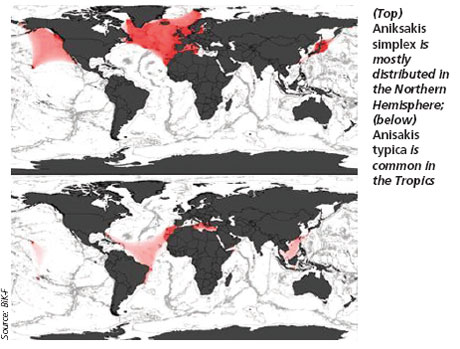