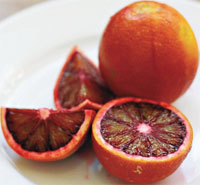 British scientists have identified a gene that gives blood colour to blood oranges. Called Ruby, the gene helps fight obesity and heart disease. Scientists have also discovered how the gene is activated, raising the possibility of switching it on in ordinary “blonde” orange varieties. The blood variety is more expensive than the blonde one because it requires a cold period during ripening and so is largely grown in the Italian island of Sicily. The Plant Cell, March 16

Physics
To see into bones 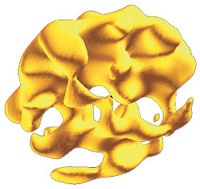 Scientists have developed a new way of seeing inside solid objects, including animal bones and tissues. The technique, a new kind of magnetic resonance imaging (MRI), creates three-dimensional images of hard and soft solids based on signals emitted by their phosphorus content. Standard MRI produces an image by manipulating an ob-ject’s hydrogen atoms with magnets and radio waves. The new method targets phosphorus atoms, and applies a more complicated sequence of radio wave pulses. These extra pulses allow for high-spatial-resolution imaging of elements like phosphorus. The method could be applied to archaeological artefacts and oil bearing rocks. PNAS, March 19 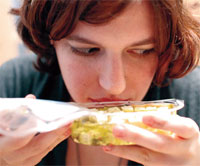 Trying to get rid of those stubborn love handles? Consider tucking into a pungent meal. A study claims stronger aromas lead to smaller bite sizes and hence, less consumption. Manipulating food aroma could result in a 5 to 10 per cent decrease in food intake per bite, say researchers. In the study, volunteers were fitted with a nose piece that was able to increase and decrease aroma intensity of sample food: custard. As researchers controlled the aroma’s strength, it controlled the custard’s intake by participants. Flavour, March 21

Say hello to Robojelly, a robot that moves like a jellyfish, expanding and contracting its synthetic muscles. Its most impressive trait is how it powers itself—by converting hydrogen and oxygen found in water into heat. Heat and water vapour are created once the oxygen and hydrogen react with the platinum on the robot’s surface. The heat is transferred to its artificial muscles, causing them to transform into different shapes. The idea is that this artificial jellyfish could swim around indefinitely, performing surveillance for the military. The robot is made of two bells composed of silicone and connected by muscles made of platinum-coated carbon nanotubes filled with nickel-titanium alloy. Smart Materials and Structures, March 21

Scientists have measured the girth of the Sun with unprecedented accuracy. They have put its radius at 696,342 km with an uncertainty of 65 km. In the past 40 years, astronomers have used a compromise value of 696,000 km as the radius with an uncertainity of 6,960 km. The new team made the measurement by carefully timing transits of Mercury, in 2003 and 2006. A transit is when a planet orbits in front of the sun. This was achieved by using a solar telescope aboard a NASA satellite, thereby bypassing the blurring caused by Earth’s atmosphere. Transits of Mercury occur 12-13 times in a century. Such observations will allow refine our understanding of the Sun’s inner structure, says the research team. Astrophysical Journal, March 19 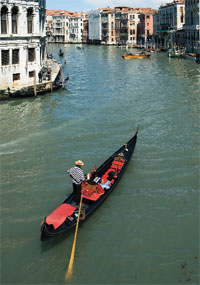 Venice might be on its way to Atlantis, after all. Despite previous indications that the “Floating City” had levelled off, new research shows that Venice is sinking about 2 mm each year. Reasons: frequent flooding, plate tectonics and rising sea levels, say researchers who used satellite imaging of the city. If things carry on as they are, Venice will subside by up to 80mm over the next 20 years. Venice’s subsidence was recognised decades ago, when scientists realised that pumping groundwater along with the ground’s compaction from centuries of building, was causing the city to sink. Officials put a stop to the pumping, and studies in the 2000s showed the subsidence had stopped. Geochemistry, Geophysics, Geosystems, March 28

Snakes in the Central and South America and Asia have evolved resistance to neurotoxin TTX, or tetrodotoxin, found in their favourite food, newts, an acquatic salamander. Scientists say each snake, ranging from the neotropical ground snake of Central and South America to the tiger keelback of East Asia, has mutations in a gene that regulates a key sodium-channel. The gene makes them highly resistant to TTX, a poison deadlier than cyanide. TTX otherwise would immobilise snakes by paralysing nervous and muscle tissues. The mutation makes the snakes slower in speed, add researchers. PNAS, March 5 (online)

Life sciences
Health is in your hands 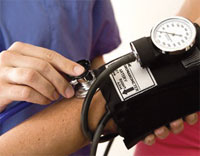 Difference in BP of both the arms may be a hint of an increased risk of heart attack or stroke over 10 years, says a research. If two readings of blood pressure are different by more than 15 mm Hg (millimetre of mercury) then it might indicate narrowing of arteries to the legs, decreased blood flow to the brain, heart disease or a 70 per cent increased risk of death from either heart attack or stroke. Researchers looked at 230 patients with high BP. There is nine per cent increased risk of death over the next 10 years for every one mm/Hg difference. BMJ, March 20

Scientists have developed a device that uses bacteria in sewage to make electricity, while cleaning the sewage. Till now, microbial fuel cell has been used to treat wastewater but tapping power through it has been a costly affair. The new device, which removes 97 per cent of the organic matter, provides the two at a lower cost. How it works: sewage flows into a sealed unit where microbes grow on an electrode. These microbes produce electrons and protons from organic materials in the sludge. Protons pass through a membrane to an unsealed unit. In that container, microbes growing on another electrode combine oxygen with the protons and electrons, producing water and electricity. National Meeting & Exposition of the American Chemical Society, March 28

Archaeology
8,000 years of civilisation—seen from the sky

Finding clues of ancient human settlements is no longer restricted to scouring every corner of a suspected area. Using satellite photos and a software, archaeologists have found 9,000 settlements in a 23,000 sq km area in Syria. The team studied elevated mounds—denizens of Syria some 7,000 years ago used to build on top of pre-existing structures—and soil discolouration. Soil surrounding settlements has a distinct colour due to high organic content. PNAS, March 19 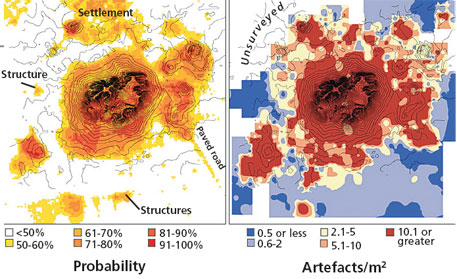