Diacetyl (DA), a butter flavouring used in microwave popcorn and margarine, could intensify the production of abnormal brain proteins that have been linked to Alzheimer’s. Researchers found that DA has a structure similar to precursors of beta-amyloid proteins and triggers their clumping in the brain. This is a tell-tale marker of Alzheimer’s. They also found that it can easily penetrate the blood-brain barrier, layer of cells that keeps harmful substances from entering the brain, and mitigates the effects of a protein that protects nerve cells.

Just like polluting industries, sick trees too could be behind the rise in methane levels. Scientists have found that old, fungus-ridden trees in forests are a significant source of the greenhouse gas. They say that most 80 to 100 years old trees in the Yale Myers forest in the US are hollowed by a fungus that creates favourable conditions for the growth of methane-producing microorganisms.

Normal concentrations of methane in air across the globe are 2 ppm, but these trees have methane levels of 15,000 ppm. If this figure is applied to all such diseased trees around the world, the methane thus produced would be 10 per cent of the global methane emissions. Geophysical Research Letters, August 9 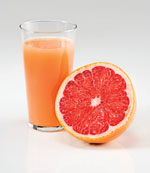 It is known that an apple a day keeps the doctor away but grapefruit is no less beneficial. It can help reduce dosage of anti-cancer drug sirolumus significantly. Researchers found the drug to be three times more effective when combined with 235 millilitres of grapefruit juice a day.

If administered alone, only 14 per cent of the drug is absorbed by the body while with grapefruit juice the absorption rate increases by 350 per cent. This helps lower the dosage from 90 mg to 30 mg a week and reduce side effects. The juice works by blocking an enzyme that breaks down the drug thus increasing its retention in the body.

ASTROPHYSICS
Rise of the Phoenix

Astronomers have found an extraordinary galaxy cluster in which stars are forming at the highest rate ever observed. The Phoenix cluster is also the most powerful producer of X-rays known so far. The cluster is forming around 740 stars per year while our own galaxy, Milky Way, produces just one to two new stars every year on an average.

The discovery is significant as it questions traditional knowledge of how the massive galaxies in the centres of clusters grow. These clusters are crucial objects for studies on cosmology and galaxy evolution. Nature, August 16 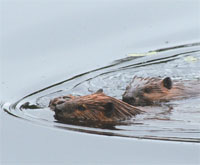 Beavers are habitual dam-builders. Using mud, stones and timber, the creatures erect these structures as a protection against predators and for easy access to food during winters. Representatives of recreational fisheries consider these dams a nuisance that block migratory life phases of economically important fish stocks like salmon. But a study indicates that they are not as bad. In fact, beaver dams increase habitat diversity, creating new areas that provide refuge for the fish during periods when river levels fluctuate, and attract wildlife which many fish feed on. As a result, there are more fish which are more productive. Fish and Fisheries, June 1

BIOLOGY
Potato, not the couch

Modern sedentary lifestyle has for long been blamed for rise in obesity. But researchers have found that it is caused by increased food consumption and not lower expenditure of energy, as claimed. They compared the metabolic rates of the Hadza, the traditional hunter-gatherers of Africa, with adults in the US and Europe. The researchers found that total energy expenditure of both was similar. They say the finding challenges the view that Westerners are getting fatter as they burn energy more slowly due to their inactive lifestyle. PLoS ONE, July 25

Male contraceptive pill might soon be a reality. Researchers have found that a small lab-developed molecule, JQ1, makes male mice reversibly infertile without lowering their sex drive. Till now the main difficulty in developing a pill for males was getting any drug across the blood-testis barrier, where it can reach the sperm-generating cells. But this molecule can sneak its way past this barrier and block the production of BRDT, a protein that is essential for sperm production. It thus causes a reversible decrease in sperm count and motility. Scientists believe that the molecule can offer a hormone-free birth control measure for men. Cell, August 17

By 2050, more people will die of pollution than malaria and water-borne diseases combined. Using atmospheric chemistry models, researchers have predicted that pollution would kill over six million people per year by mid-century. At present, air pollution causes 1.3 million out of 57 million deaths per year worldwide, says WHO data. The analysis is the first to include all five major air pollutants: particulate matter, nitrogen dioxide, sulphur dioxide, ozone and carbon monoxide. It showed that northern India and the Arabian Gulf region would be the worst affected and will suffer a marked increase in ozone levels. Atmospheric Chemistry and Physics, August 1 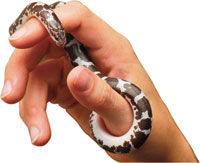 Scientists are planning to develop non-abrasive materials based on snakeskin that resist wear and tear despite being exposed to constant friction. Snakes have evolved a way to facilitate limbless locomotion: an extremely abrasion-resistant skin. It is stiff and hard on the outside and soft and flexible inside. This property helps in distributing the external force over a larger area, reducing chances of injury. A material based on this property can be extremely useful for medical engineering sector in developing friction-resistant artificial implants. Journal of the Royal Society Interface, August 15 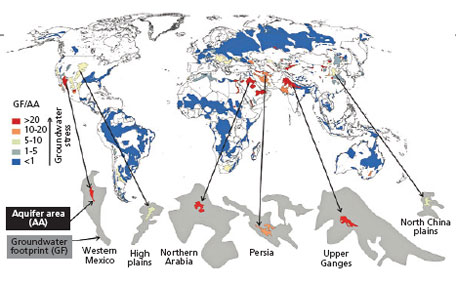 Agricultural regions in South and West Asia and certain parts of North America are using up groundwater resources at a much faster rate than can be naturally replenished. Scientists found this by creating a measure of sustainability called “groundwater footprint”, which compares the area of land sustained by groundwater with the size of the aquifer beneath. They studied the global groundwater footprint and found that humans are using 3.5 times more water than can be replenished by the major aquifers across the globe. Upper Ganges basin of India and Pakistan, Saudi Arabia, Iran, western Mexico and the US were found to produce the largest footprint by far. Nature, August 8 (online)