Survival of silvery fishes like sardines depend on their ability to reflect maximum light and remain nearly invisible to predators. But it is well known that reflective surfaces polarise light, a process which should have made the fish visible. The fish owe their survival to the presence of two types of crystals in their skin.

Each of these crystals polarise light in opposite directions, cancelling out the total polarisation and making the fish invisible in water. The property can help develop better optical devices. Nature Photonics, October 21 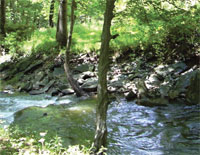 ECOLOGY
Blame it on ozone

While effect of high levels of ozone, a greenhouse gas, on crops has been studied, its impact on the earth’s water cycle is not known. A statistical analysis shows high ozone level leads to higher temperatures that make the trees absorb more water. This might reduce water runoff from forests and in turn, amount of water available to people and animals.

The analysis is based on 18-26 years of data on atmospheric water supply and demand in the US. It showed that the gas reduced 7 per cent stream flow in West Virginia, which has the lowest ozone levels. The effect was 23 per cent in Tennessee, the highest ozone area. Global Change Biology, November 1 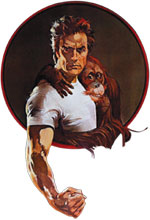 We have not just evolved from chimpanzees and other primates but also share with them the genes that give rise to blood groups. Two amino acids responsible for A and B blood groups are identical in humans and primates.

Only the watery layer of sea contains oxygen and all microorganisms living in the sediments meet their energy needs from other electron-accepting molecules such as sulphates. Transfer of electrons to sulphate generates toxic hydrogen sulphide.

A study suggests filamentous bacteria of Desulfobulbaceae family help break down this toxin to other oxidised sulfur compounds by transferring electrons to the oxygen rich layers.

It states that metal-containing proteins in the bacterium allow electron movement in the oxygen-free part of seabed. Similar mechanism could be behind coupling of other spatially separated biogeochemical reactions too. Nature, October 24 (online) 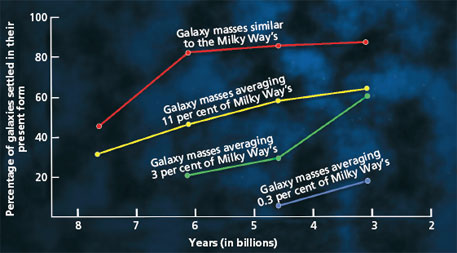 Galaxies are considered to have taken their present form about 8 billion years ago and astronomers believe that there has been no further development in the galaxies ever since. But a study proves that orderly, disk-shaped galaxies, like the Milky Way, have been evolving all this time. Scientists observed the internal motions of several galaxies, including most distant blue galaxies, located two to eight billion light-years away, which exhibit disorganised motions. Using wavelengths of radiation emitted by these galaxies, scientists found that these galaxies are becoming more and more organised over time. The finding can help develop better computer simulations of galaxy evolution. The Astrophysical Journal, October 20

It has been known that girls in the US are maturing sexually much earlier than decades ago. A study has found that same is true for boys too. They are showing signs of puberty like pubic hair and testicular enlargement, six months to two years earlier than previously reported. Most white boys are entering puberty at an age of 10 and at African-Americans at age nine. Researchers say a combination of factors like chemical exposures, obesity, junk food and too much computer time might be the culprit. The trend can have adverse health and psychological impacts. Pediatrics, October 20 (online)

A hydrogen fuel cell converts hydrogen and oxygen into water and produces electricity. It is a non-polluting alternative to fossil fuels. Researchers have found that a graphene sheet covered in cobalt and cobalt-oxide nanoparticles can act as a cheap, efficient and highly stable catalyst for the cell. Currently the cells use platinum as catalyst but the metal is expensive and degrades over time.

The deadly quake that shook Lorca in Spain last year could have been triggered by deep wells drilled by farmers in the region as ground water level dropped by 250 metres over the years.

Nearly 80 per cent of such wells are illegal. Using satellite images, scientists have found that the earthquake occurred after a fault, near a basin weakened by 50 years of groundwater extraction, ruptured.

After the water was drained out, the weight of the rocks made the terrain subside. The finding also adds to concerns about new energy extraction technologies like fracking. Nature Geoscience, October 21 (online) 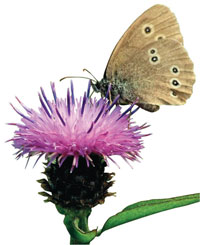 Extreme weather events like drought can make butterflies extinct. This is because certain butterfly species take too long to recover after a drought.

Severe summer droughts are becoming common in some areas of the UK and would mean that by the time a butterfly species recovers from a drought, another drought hits. Data from 1990-1999 shows marked decline in Ringlet butterfly population after the 1995 drought. The decline was severe in drier regions. 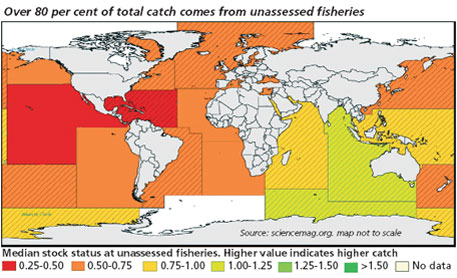