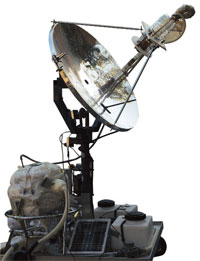 Scientists have now developed a method which can be used to turn icy cold water directly to steam using solar energy and light-absorbing nanoparticles. When submerged in water and exposed to sunlight, nanoparticles in the solar steam device heat up very quickly due to their extremely small size.

This makes the water vaporise instantly. The device has an efficiency of 24 percent, compared to 15 percent efficiency of solar panels. It can be used for water purification in developing countries. ACS Nano, November 19 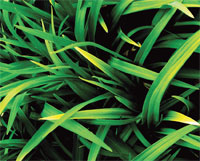 A plant that eats other plants? Plants meet their energy needs through photosynthesis using carbon dioxide, water and sunlight. Animals, bacteria, and fungi, on the other hand, eat these plants and use their cellulose as the source of energy for survival.

It has now been found that a microscopically small green alga, Chlamydomonas reinhardtii, can also eat other plants to meet its energy needs.

It can photosynthesise like other plants but when faced with a low carbon dioxide environment, the single-cell plants secrete enzymes that ‘digest’ the cellulose of the neighbouring plants for energy. Scientists say this property of the alga can make it useful in biofuel production. Nature, November 20 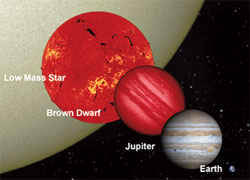 ASTROPHYSICS
No chance for life

Brown and white dwarfs are not stars like our sun but they glow. While white dwarfs are hot cores of dead stars, brown dwarfs are failed stars that have cooled off by radiating its internal thermal energy. Scientists have long believed that Earth-like planets that support life might orbit these stars.

But a new study has indicated that even if a planet is found orbiting a white or brown dwarf, it would be a poor candidate for life.

Astronomers say the constantly shifting habitable zones—range of distances where life could exist—of these dwarf stars would make it difficult for any life form to sustain on planets orbiting them. Astrobiology, November 1 (online)

Polymer scientists have developed a scaffold system that can do everything from stopping bleeding to filtering water. It is an electrospun polymer fiber mat on which different bioactive molecules can be attached without compromising their biological functions. Thus, by attaching surface proteins the polymer can be made to act as a vascular graft for use during aneurysm surgery, by attaching antibiotics it can be used to filter water or fight a wound infection. Researchers say the new polymer bandage can also be customised by surgeons for rebuilding blood vessels or nerves and can be used by army doctors as one bandage that can treat wounds and fractures alike. Journal of the American Chemical Society, September 26

ZOOLOGY
Virus in the garden

Avian pox in Britain has been seen in birds like sparrows for several years. But a new deadlier form of the virus has eme-rged and is targetting garden birds like great tits. It causes large coloured tumours that stop the birds from feeding and breeding and make them more visible to predators. Such birds show low growth rates and therefore have difficulty in dealing with other environmental factors that might reduce their numbers. The disease is thought to have arrived in UK via mosquitos from central Europe and Scandinavia. PLoS One, November 21

Phosphorus in wastewater discharged from paper and pulp mills pollutes lakes and rivers. Researchers have found that the amount of phosphorus in the wastewater can easily be reduced using a method called simultaneous precipitation.

Currently, aluminium is used in post-treatment precipitation methods, but the sludge so produced is difficult to process. Water Science & Technology, November 15 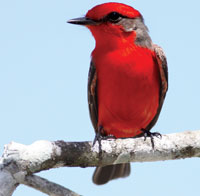 Birds sing to attract mates, secure territories and defend against predators. Disturbances like urban noise can, however, disrupt this communication, playing havoc with their breeding success. It is known that songbirds or oscines like robins adapt their song in response to noise.

But not much has been known about the sister group of oscines, the tyrannis, like vermilion flycatcher. A study has now shown that while songbirds change the frequency of their songs in areas with high noise levels, male flycatchers change the length of their songs. In quieter places they sing both long and short songs but in noisy areas they produce only long songs. Behavioral Ecology and Sociobiology, November 18

Scientists have completed the first comprehensive analysis of the bread wheat genome. They have identified some traits in the complex genome that can help make the food crop more productive, nutritious and resistant to drought in the future. Over 35 per cent of the world’s population depends on it for survival. Wheat is a hybrid, comprising genes from three different grasses, that are maintained separately within the plant. It, thus, has over 90,000 genes, nearly five times more than humans. Scientists now aim to decipher the full DNA sequence of the plant to pinpoint the location of all the genes linked with agriculturally useful traits. Nature, November 29 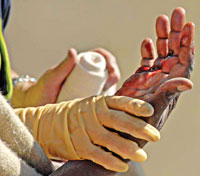 Clotting is crucial for preventing excessive blood loss upon injury. The process involves several proteins, like thrombin and factor XI, that produce clots. But patients of hemophilia C experience uncontrollable bleeding even though they miss just one of these proteins, factor XI. A study has now shown that thrombin moves through blood in steady waves and Factor XI is crucial for the spread of these waves; a process necessary for sealing big wounds.

The study shows these waves are absent in hemophilia C patients. This is why they experience severe bleeding after big injuries but not after minor wounds that do not need big blood clots. The study can help develop better treatments for hemophilia. Biophysical Journal, November 21 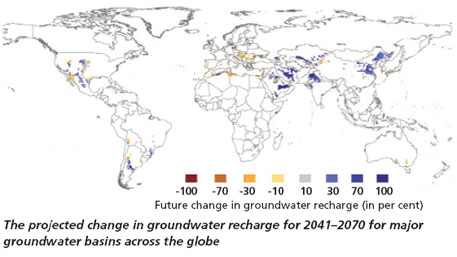 Groundwater provides drinking water for millions and is the primary source of water for irrigation in most countries. But this water does not get replenished at the same rate as it is being extracted and therefore groundwater levels are falling. Maximum depletion has been observed in agriculturally important regions like India, Bangladesh, Pakistan, Nepal, China, western United States and Mexico. A study shows that reduced groundwater recharge rates are adding to water stress in these regions. It predicts that in certain regions in Africa, northeastern Brazil and the central Andes, recharge rates might further go down over the coming years. The study emphasises the need for regional strategies for management of groundwater resources in terms of recharge and extraction. Nature Geoscience, November 18 (online)