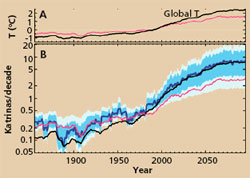 Since 1923, there has been a Katrina-magnitude storm surge (huge floods of water that occur when the sea rises during a storm) roughly every 20 years. But similarily devastating storm surges could be 10 times more frequent if global temperatures rise by 2°C, coupled with sea-level rise. According to climatic projections, average atmospheric temperature is expected to rise by 2-5°C by the end of the century. This would mean a Katrina-like storm surge every year. PNAS, March 18

Want to lose weight? Think about what you ate in the last meal, it would keep you from overeating during your subsequent meals. During a sham taste test, scientists asked men to rate three types of salted popcorn and encouraged them to eat as much as they wanted. It was found that those who were first asked to recall exactly what they had eaten for lunch downed 30 per cent less popcorn than those who were allowed to skip the review session. Remembering what one ate recently enhances the awareness of how satiating the food was and therefore has an effect on subsequent consumption. American Journal of Clinical Nutrition, April 1

Wild stingrays at “interactive ecotourism” sites such as the Stingray City in the Cayman Islands, demonstrate major behavioural changes due to exposure to tourists. They invert their sleep cycle from a nocturnal one to a diurnal one, change from a solitary animal to a school-forming one, mate and give birth year round as opposed to seasonal mating and even become aggressive and bite each other. This shows there is a need to study animal behaviour changes as eco-tourism becomes ever more popular since many animals do not adapt well to such changes and can move closer to extinction. PLoS ONE, March 18

Acupuncture has been used in Eastern medicine for hundreds of years to relieve stress. How it happens, however, has always been a mystery. It has now been shown the therapy works by regulating certain hormones, such as cortisol, that the body secretes into the bloodstream as a reaction to stress. If the levels of these stress hormones remain constantly high, such as in the case of chronic stress, it leads to many health problems, like depression, insomnia and anxiety. Acupuncture dials down this heightened stress response and returns the hormone levels towards normal. Journal of Endocrinology, April 1 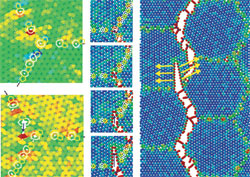 Natural graphene, the atom-thick sheet of carbon, is the strongest materials in the world. But defects in these sheets can make the wonder material weak. Lab-grown graphene sheets are not perfect and have several points where different sheets merge together. At these points, graphene is about half as strong as natural graphene. The atoms on the lines that connect these points are called grain boundaries and usually have a five- and seven- atom ring structure unlike the usual six-ring structure of graphene. These atoms are weaker than the normal hexagonal graphene ring. Seven-atom rings are the weakest and most likely areas where a graphene sheet would crack. Such defects can harm the performance of graphene in applications where its intrinsic strength is a key feature, like stretchable or flexible electronics. Nano Letters, March 25 (online)

Time for a fact check

Planktons near the surface of oceans soak up double the amount of carbon dioxide than estimated, says a study. It shows that the scientific models, such as the Redfield ratio, that estimate the amount of carbon dioxide in water need to be revised. Contrary to the model, the ratio of carbon, nitrogen and phosphorous isn't constant, but varies widely. And, the variation is not based on the depths of the ocean, but on the latitudes—oceans near the equator have more carbon than oceans near the polar regions. Nature Geoscience, March 17 (online) 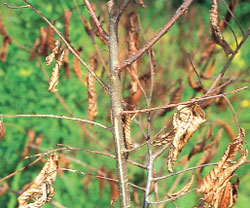 The genome of Ophiostoma ulmi, the fungus that causes Dutch elm disease, has been mapped. The fungus, which often kills trees two years after infection, is a distant cousin of beer yeasts and bread moulds but has not been studied in as much detail ever. It originated in the Himalayas and reached the Netherlands shortly after the First World War, earning it the name Dutch elm disease. The breakthrough could help scientists develop ways to control the fungus. In Canada, it was first detected in 1945, after spreading from the US. It eventually killed 80 per cent of Toronto’s 35,000 elms in a single year. BMC Genomics, March 12

Rising temperatures are making coral reefs decline across the globe. Invasive, damaging techniques are currently used to determine coral health. It has now been found that measuring the intensity of a corals’ fluorescent glow, a poorly understood phenomenon, can help gauge its health. Fluorescence levels from a coral decline fast in response to heat as well as cold stress and can, thus, act as an early indicator of coral health before it begins to bleach and eventually dies. What’s more, this decline can be tested non-invasively in the field without having to remove coral samples for lab analysis. Nature, March 12 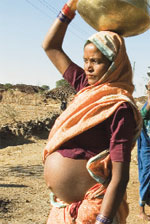 DDT (dichlorodiphenyltrichloroethane) was banned in the US in 1972 after three decades of use when it was found that it persists in the environment. However, it is still used for malaria control in several countries, including India and South Africa. It has long been known that people exposed to DDT are more prone to high blood pressure. Now it has been shown, for the first time, that even prenatal exposure to DDT is harmful and can lead to hypertension in adulthood. What’s worse, the risk is three times higher for infant girls. Environmental Health Perspectives, March 12 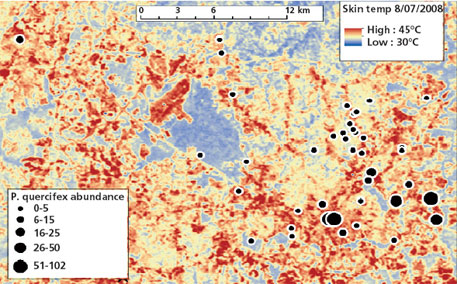 Higher temperatures in urban set-ups, the so-called heat islands, are attracting insect pests called scale insects—these are small pests that latch onto a plant and feed off its sap, weakening and potentially killing the plant. This explains why trees in urban areas are infested by so many of these pests. A study has found that scale insect population was 13 times higher on willow oak trees in the hottest parts of Raleigh, in North Carolina, US, than in the cooler areas of the city . PLoS ONE, March 27