CLIMATE SCIENCES
Flood alert
By 2100 global warming will boost the frequency of extreme flood events in 42 per cent of the earth’s land, including humid areas of India, Southeast Asia and Africa. Flood incidence is, however, projected to decrease in most of Europe except the UK and northern France. This is the conclusion of a comparative analysis of 11 models for the impacts of greenhouse gas emissions on 29 river basins across the globe. The analysis shows that if warming progresses without effective countermeasures, many of the world’s 29 major rivers would see massive floods, which currently occur once a century, at an increased frequency of every 10 to 50 years. Nature Climate Change, June 9 (online)

HEALTH SCIENCES
Hidden layer
A new part has been discovered in the eye. Till now it was thought that cornea, the transparent, circular part at the front of the eye, has five layers. But it has now been found that a sixth one, named Dua’s layer after the scientist who found it, exists at the back of the cornea. The new-found body part is a skinny but tough structure of 15 microns. Researchers believe that a tear in this layer is the cause of keratoconus, an eye disease where the cornea bulges and becomes cone-shaped. The finding would help advance understanding of a number of diseases of the cornea. Ophthalmology, May 28 (online)

MATERIAL SCIENCES
Scabby bandage
Commonly used bandages control bleeding and reduce infection risk but are of no help in healing the wound. Taking inspiration from human scab a new type of bandage material has now been developed that can speed up healing. It consists of flexible nano-scale membrane of polyurethane plastic woven into a pattern that mimics the underside of scabs, which have tiny fibers arranged in the same direction like velvet. These fibres help repair open wounds by attracting new cells from the bloodstream that speed up the natural healing process. ACS Applied Materials & Interfaces, June 12 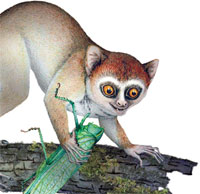 EVOLUTION
Tiny ancestor
Palaeontologists have discovered what they believe is the world’s oldest known fossil of a primate in an ancient lake bed in China. The new species, named Archicebus achilles, lived about 55 million years ago and was even smaller than today’s smallest primate, the pygmy mouse lemur. It appears to have been a tree-dweller that used a leap-and-grasp motion. The skeleton is about 7 million years older than the oldest fossil primate skeletons known till date. It belongs to an entirely separate branch of the primate evolutionary tree from those specimens, lying much closer to the lineage leading to modern monkeys, apes and humans. The discovery provides insight into the earliest phases of primate evolution and bolsters a theory that early primates first developed in Asia. Nature, June 5 (online)

TECHNOLOGY
Battery booster
A new electrode material can make batteries run for longer. Negative electrodes of present day batteries are made of graphite, whose layers can store one lithium ion per carbon atom. The new material, lithium borosilicide, consists of boron and silicon atoms connected tetrahedrally, like carbon atoms in graphite. But unlike graphite it has channels within the tetrahedral structure. These channels provide 10- times more sites for lithium ion storage than conventional graphite layer does and, thus, highly increase the chargestoring capacity of lithium ion batteries. This could pave the way for laptops and mobile phones that run for days on a single charge. Angewandte Chemie, June 3

ASTROPHYSICS
Cradle of dust
Discovery of a “dust trap” around a distant star has given clues to solve the long-standing mystery of how planets form. Computer models show that clumps of dust orbiting a star would either become large enough to smash into other clumps or drift too close to their parent star, breaking apart in both cases. They, thus, cannot survive long enough to form anything as large as a planet. New image of a region around a young star in Ophiuchus constellation has now shown a cashewshaped dust cloud rather than the expected dust ring. This unusual structure could possibly work as a protective cocoon, which traps large dust grains and keeps them safe during the critical early steps of planet, asteroid and comet formation. Science, June 7 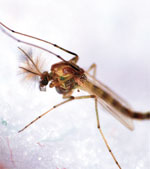 ZOOLOGY
Sniff gene
Mosquitoes that spread deadly human diseases like malaria, dengue and chikungunya generally distinguish humans from other animals using body odour. Thus altering a gene that helps mosquitoes sniff out humans can help keep the pesky insect off. Experiments on a genetically modified mosquito have shown that a specific gene called orco makes the insects prefer humans over other mammals. While a mutant mosquito with orco gene shut off might land on a human it flies off without biting just as it would do with a guinea pig. Given the ubiquity of orca gene in the insect world, it can be of significant help in development of life-saving repellants. Nature, May 29 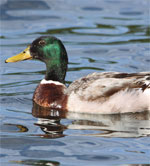 BIOLOGY
Quack code
The genome of wild duck has been mapped. The bird is the principal natural host of bird flu viruses but is a “silent carrier” and seldom develops flu symptoms. The genome analysis provides insights into how duck’s immune system responds to bird flu infections. It reveals genetic factors that protect wild ducks from harmful effects of bird flu. An understanding of these factors can help develop treatments for bird flu in humans, which has become a major health concern in the past decade. Nature Genetics, June 9 (online) 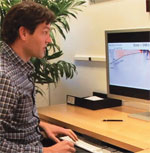 EARTH SCIENCES
Sound alert
Sounds from undersea earthquakes can predict if a massive tsunami is on its way. When earthquakes shake the ocean floor, they can trigger big killer waves and produce sound waves that move 10 times faster than ocean waves. Through computer modelling of acoustic data from the 2011 Japan tsunami, scientists have found that these sound waves are very sensitive to vertical sea floor uplift associated with a tsunami. The sonic signature, if captured in real time, could give scientists an idea about the height of the waves and provide 15 to 20 minutes of advance notice before a tsunami hits. The Bulletin of the Seismological Society of America, May 3

HEALTH SCIENCES
Pricey drag
Your smoke break costs your employer `537,208 a year. A first of its kind study has shown that an employee who smokes costs companies more than one who has never smoked. On average the employer loses `1,82,681 due to smoke breaks, `30,694 due to absenteeism, `27,428 due to lose of productivity related to nicotine addiction and `1,22,064 in extra health care costs. But pension costs are slightly less for smokers— `18,000 less per year compared to non-smokers—as they tend to die younger. The finding may help employers formulate better-informed tobacco-related policies. Tobacco Control, June 3 (online)